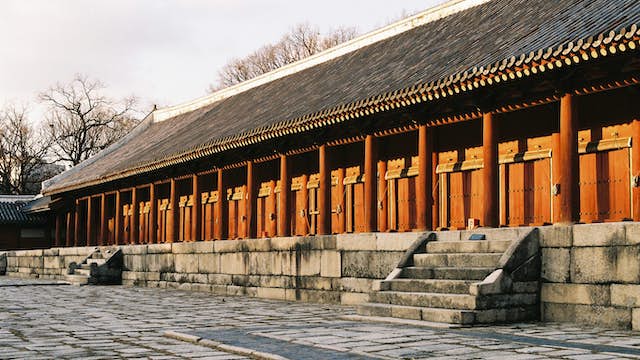 Surrounded by dense woodland, the impressive buildings of the Confucian shrine Jongmyo house the spirit tablets of the Joseon kings and queens and some of their most loyal government officials. Their spirits are believed to reside in a special hole bored into the wooden tablets.

For its architecture and the special ceremonies that take place here, the shrine has been awarded World Heritage status: the most famous ceremony is the Jongmyo Daeje in early May.

In the middle of the main path you’ll notice triple stone paths; one is for the king, the other for the crown prince and the raised middle section for the spirits.

The main shrine, Jeongjeon, constructed in 1395, is a very long, stately and austere building fronted by a large stone-flagged courtyard. Inside are 49 royal spirit tablets in 19 small windowless rooms, which are usually locked.

On the right-hand side of the main entrance is Gonsindang, which houses the spirit tablets of 83 meritorious subjects. On the left side are shrines to Chilsa, the seven gods who aid kings.

The smaller shrine, Yeongnyeongjeon, built in 1421, has 34 spirit tablets of lesser kings in six rooms. These include four ancestors of King Taejo (the founder of the Joseon dynasty) who were made kings posthumously.

Free one-hour guided tours in English are available weekdays at 10am, noon, 2pm and 4pm.