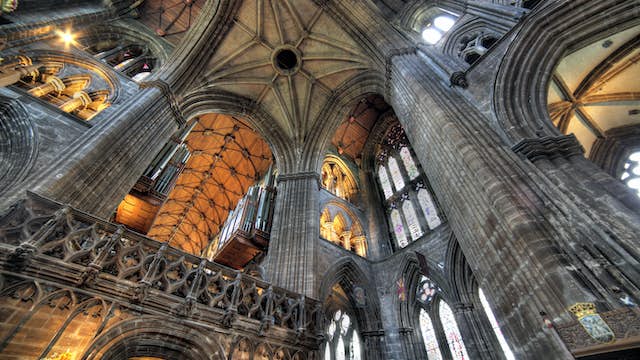 Glasgow Cathedral has a rare timelessness. The dark, imposing interior conjures up medieval might and can send a shiver down the spine. It's a shining example of Gothic architecture, and unlike nearly all of Scotland's cathedrals, it survived the turmoil of the Reformation mobs almost intact because the Protestants decided to repurpose it for their own worship. Most of the current building dates from the 15th century.

Built on the supposed site of the tomb of St Kentigern (Mungo), Glasgow Cathedral has been closely entwined with the city's history. The necropolis behind it is one of Glasgow's best rambles.

The fairly svelte 13th-century Gothic lines of the building are nicely offset by the elegant central tower. Fine tracery can be seen on the windows, particularly at the principal western entrance, used only on special occasions. The doorway is fairly unadorned, with just some blind arching above it. It's worth walking around to the cathedral's other end, where the protruding, heavily buttressed lower church gives the building a bulky asymmetry.

The nave makes an impact with its height – around 100 feet (30 meters) – and slender grace. There's some stunning stained glass, most of which is 20th century. Particularly fine is Francis Spear's The Creation (1958) above the western door, with Adam and Eve center stage. The aisles, separated by graceful arcades, are flanked with tombs and war memorials hung with regimental colors. Above the arcades are two further levels of elegant arching. The roof is 20th century but conserves some original timber.

The eastern end of the church is divided from the western nave by a harmonious late-15th-century stone choir screen, or pulpitum, with a central door topped by a balustrade. It's decorated with seven characterful pairs of figures that may represent the seven deadly sins. Going through it, you are confronted with a splendid vista of the choir stalls leading to the four narrow lancet windows of the eastern end. These are also evocative works by Francis Spear that depict the Apostles. In the northeastern corner of this area is the upper chapterhouse, a mostly 15th-century space used as a sacristy. The University of Glasgow was founded here in 1451; larger premises were soon built for it.

This vaulted crypt is an atmospheric space with thick pillars. There's a modern altar over the supposed location of the tomb of St Kentigern/Mungo, a 6th-to-7th-century figure who is the city's patron. His legend grew in the 11th and 12th centuries and his tomb became a major medieval pilgrimage destination. This area was built in the mid-13th century to provide a more fitting setting for the saint's resting place.

On display is some of the fine 19th-century stained glass from Munich that once adorned the windows but was removed in the 20th century, probably because it was fading.

The sunken ambulatory at the eastern end has four square chapels separated by arches; this area featured as L'Hôpital des Anges in Paris in season two of Outlander. The tomb of Bishop Wishart, a key supporter of Robert the Bruce and an important figure in the cathedral's construction, is here. The southernmost chapel has a well that was likely venerated before the cathedral was even built and perhaps even before Christianity came to the area. There's also a lower chapterhouse here, usually closed off by a grille.

After the gloomy gravitas of the rest of the cathedral, the whiteness in the Blackadder Aisle (also spelled Blacader) feels like a dose of light. Though originally this aisle was designed as a crypt for a chapel to be built above, this was never constructed. The tierceron vaulting is spectacular, with ornate ceiling bosses. This was the last part of the cathedral to be built, in the late 15th century.

The hill behind the cathedral was converted from a park to a cemetery in the 1830s. It is interdenominational; indeed, the first burial was a Jewish man in 1832. It's a spectacular spot for a stroll; there are 50-odd thousand burials here and 3500 monuments, including some designed by Alexander Thomson and Charles Rennie Mackintosh. You reach it via the "bridge of sighs" that separates the realms of the living and dead; just wander the paths and enjoy the city views and the ornateness of the tombs, built when Glasgow's wealthy captains of industry were at their apogee. At the very top is a monument to John Knox that predates the cemetery.

Entry to Glasgow Cathedral is free but donations for upkeep are appreciated. To guarantee entry, book your timed tickets online in advance of your visit. There are helpful guides throughout the cathedral; don't hesitate to speak to them, as they can point out some interesting details. There's no toilet in the necropolis or the cathedral; pop into St Mungo's museum if you're caught short.

Getting to Glasgow Cathedral

It's a 15-minute uphill walk to the cathedral from George Square. Numerous buses pass by, including buses 38 and 57.