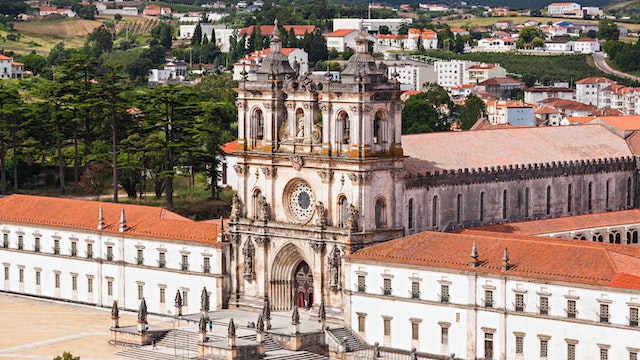 One of Iberia's great monasteries utterly dominates the town of Alcobaça. Hiding behind the imposing baroque facade lies a high, austere, monkish church (free entry) with a forest of unadorned 12th-century arches. But make sure you visit the rest too: the atmospheric refectory, vast dormitory and other spaces bring back the Cistercian life, which, according to sources, wasn't quite as austere here as it should have been.

The monastery was founded in 1153 by Afonso Henriques, first king of Portugal, honouring a vow he’d made after the Reconquista of Santarém in 1147. The monastery estate became one of the richest and most powerful in the country, apparently housing 999 monks, who held Mass nonstop in shifts.

In the 18th century, however, it was the monks’ growing decadence that became famous, thanks to the writings of 18th-century travellers such as William Beckford, who, allowing for his tendency to exaggerate, was shocked at the ‘perpetual gormandising…the fat waddling monks and sleek friars with wanton eyes…’. The party ended in 1834 with the dissolution of the religious orders.

Much of the original facade of the church was altered in the 17th and 18th centuries. However, once you step inside, the combination of Gothic ambition and Cistercian austerity hits you immediately: the nave is a breathtaking 106m long but only 23m wide, with huge pillars and truncated columns. It is modelled on the French abbey of Clairvaux.

Occupying the south and north transepts are two intricately carved 14th-century tombs, the church’s greatest possessions, which commemorate the tragic love story of Dom Pedro and Dona Inês de Castro. Although the tombs themselves were badly damaged by rampaging French troops in search of treasure in 1811, they still show extraordinary narrative detail. The tombs are inscribed Até ao Fím do Mundo (until the end of the world) and, on Pedro’s orders, placed foot to foot so that, when the time comes, they can rise up and see each other straight away.

Nearby, look at the remarkable clay figures in the chapel of St Bernard and the unusual arching in the ambulatory.

The grand kitchen, described by Beckford as ‘the most distinguished temple of gluttony in all Europe’, owes its immense size to alterations carried out in the 18th century, including a water channel built through the middle to divert wild fish right into the kitchen.

The adjacent refectory, huge and vaulted, is where the monks ate in silence while the Bible was read to them from the pulpit, reached by a photogenic arched staircase. The monks entered through a narrow door on their way to the refectory; those too fat to pass through were forced to fast.

The beautiful Claustro do Silencio (Cloister of Silence) dates from two eras: Dom Dinis built the intricate lower storey, with its arches and traceried stone circles, in the 14th century; the upper storey, typically Manueline in style, was added in the 16th century. Off the northwestern corner of the cloister is the 18th-century Sala dos Reis (Kings’ Room), so called because statues of practically all the kings of Portugal line the walls. Below them are azulejo friezes depicting stories relevant to the abbey’s construction. Upstairs, make sure you see the vast vaulted dormitory.