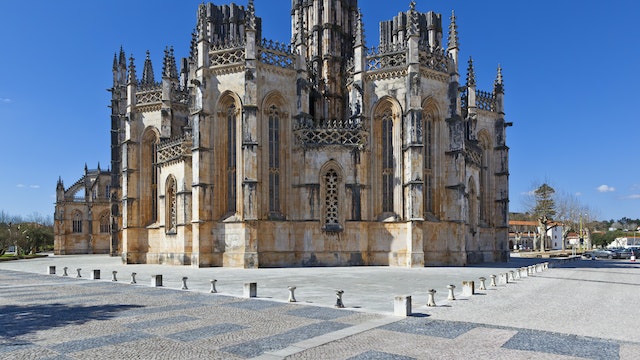 The extraordinary monastery of Batalha was built to commemorate the 1385 Battle of Aljubarrota (fought just south of here). Most of the monument was completed by 1434 in Flamboyant Gothic, but Manueline exuberance steals the show, thanks to additions made in the 15th and 16th centuries (the 'unfinished chapels').

At the Battle of Aljubarrota, around 6500 Portuguese, commanded by Dom Nuno Álvares Pereira and supported by a few hundred English soldiers, repulsed a 30,000-strong force of Juan I of Castile, who had come claiming the throne of João d’Avis. João called on the Virgin Mary for help and vowed to build a superb monastery in return for victory. Two years later he made good on his promise, as work began on this magnificent house of worship.

The glorious limestone exterior bristles with pinnacles and parapets, flying buttresses and balustrades, and late-Gothic carved windows, as well as octagonal chapels and massive columns. The spectacular western doorway's layered arches pack in apostles, angels, saints and prophets, all topped by Christ and the Evangelists.

The vast, vaulted Gothic interior is plain, long and high (the highest in Portugal), warmed by light from the deep-hued stained-glass windows. Some of the interior was originally painted. To the right as you enter is the intricate Capela do Fundador (Founder’s Chapel), an achingly beautiful, lofty, star-vaulted square room lit by an octagonal lantern. In the centre is the joint tomb (the first pantheon to be built in Portugal) of João I and his English wife, Philippa of Lancaster, whose marriage in 1387 cemented the alliance that still exists between Portugal and England. The tombs of their four youngest sons line the south wall of the chapel, including that of Henry the Navigator (second from the right).

Afonso Domingues, master of works during the late 1380s, built the fabulous Claustro Real (Royal Cloister) in a Gothic style, but it’s the later Manueline embellishments by the great Mateus Fernandes that really take your breath away. Every arch is a tangle of detailed stone carvings of Manueline symbols, such as armillary spheres and crosses of the Order of Christ, entwined with writhing vegetation, exotic flowers and marine motifs – corn and shells. Three graceful cypresses echo the shape of the Gothic spires atop the adjacent chapter house. (And we challenge you to spot the ancient graffiti on the walls!)

Anything would seem austere after the Claustro Real, but the simple Gothic Claustro de Dom Afonso V is like being plunged into cold water – sobering you up after all that frenzied decadence. Between the two cloisters is an interpretation centre.

To the east of the Claustro Real is the early-15th-century chapter house, Sala do Capítulo, containing a beautiful 16th-century stained-glass window. The huge vault was considered so potentially dangerous that prisoners on death row were employed to remove its supports. A guard of honour watches over the tomb of unknown soldiers (a Mozambican soldier and Flemish soldier from WWI).

The roofless Capelas Imperfeitas (Unfinished Chapels) are perhaps the most astonishing aspect of Batalha. Only accessible from outside the monastery, the octagonal mausoleum with its seven chapels was commissioned in 1437. However, the later Manueline additions by the architect Mateus Fernandes overshadow everything else.

Although Fernandes’ plan was never finished, the staggering ornamentation is all the more dramatic for being open to the sky. Most striking is the 15m-high doorway, a mass of stone-carved thistles, ivy, flowers, snails and all manner of ‘scollops and twistifications’, as William Beckford noted. Dom Duarte can enjoy it for all eternity: his tomb, and that of his wife, lie opposite the door.