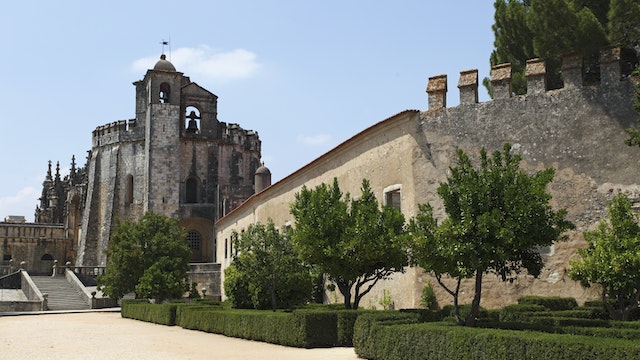 Wrapped in splendour and mystery, the Knights Templar held enormous power in Portugal from the 12th to 16th centuries, and largely bankrolled the Age of Discoveries. Their headquarters sit on wooded slopes above the town and are enclosed within 12th-century walls. The Convento de Cristo is a stony expression of magnificence, founded in 1160 by Gualdim Pais. It has chapels, cloisters and choirs in diverging styles, added over the centuries by successive kings and Grand Masters.

The Charola, the extraordinary 16-sided Templar church, thought to be in imitation of the Church of the Holy Sepulchre in Jerusalem, dominates the complex. Its eastern influences give it a very different feel to most Portuguese churches; the interior is otherworldly in its vast heights – an awesome combination of simple forms and rich embellishment. It’s said that the circular design enabled knights to attend Mass on horseback. In the centre stands an eerily Gothic high altar, while wall paintings date from the early 16th century. A huge funnel to the left is an ancient organ pipe (the organ itself is long gone).

Dom Manuel was responsible for tacking the nave on to the west side of the Charola and for commissioning a two-level choir. The coro alto (upper choir) is a fabulous Manueline work, with intricate decor on the vaulting and windows. The main western doorway into the nave is a splendid example of Spanish plateresque style.

Seeming to have grown from the wall, the Janela Manuelina (Manueline Window) on the church's western side is the most famous and fantastical feature of the monastery. It’s the ultimate in Manueline extravagance, a celebration of the Age of Discoveries: a Medusa tangle of snaking ropes, seaweed and cork boats, atop of which floats the Cross of the Order of Christ and the royal arms and armillary spheres of Dom Manuel. It’s best seen from the roof of the adjacent Claustro de Santa Bárbara. Follow signs to the janela. Unfortunately obscured by the Claustro Principal is an almost-equivalent window on the southern side of the church.

Two serene, azulejo-decorated cloisters to the east of the Charola were built during the time when Prince Henry the Navigator was Grand Master of the order in the 15th century. The Claustro do Cemitério (Burial-Ground Cloisters) contains two 16th-century tombs and pretty citrus trees, while the two-storey Claustro da Lavagem (Ablutions Cloisters) affords nice views of the crenellated ruins of the Templars’ original castle.

The elegant Renaissance Claustro Principal (Great Cloisters) stands in striking contrast to the flamboyance of the monastery’s Manueline architecture. Commissioned during the reign of João III, the cloisters were probably designed by the Spaniard Diogo de Torralva but completed in 1587 by an Italian, Filippo Terzi. These foreign architects were among several responsible for introducing a delayed Renaissance style into Portugal. The Claustro Principal is arguably the country’s finest expression of that style: a sober ensemble of Greek columns and pillars, gentle arches and sinuous, spiralling staircases.