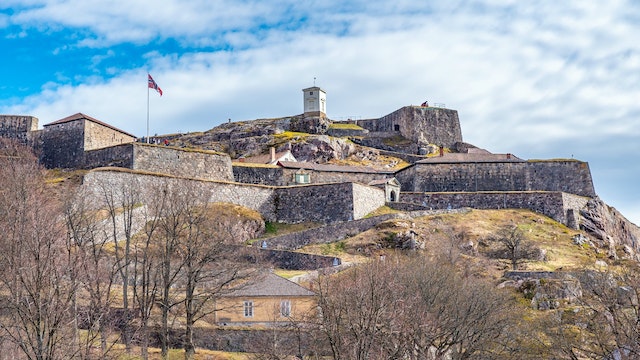 Crowning the hilltop behind Halden is the 1661 Fredriksten Fortress, which has resisted six Swedish sieges and never been captured. The fortress covers a large area, much of which is grassy expanses and tumble-down walls, but there are a couple of interesting museums, a restored cobbled street and great views. The whole place is brought entertainingly to life through the guided tours.

On 28 July 1660 King Fredrik III of Denmark issued a declaration ordering a more sturdy fortification above Halden. The pentagonal citadel (as well as the adjoining Gyldenløve Fort to the east) was constructed across two parallel hills from 1661 to 1671, and augmented between 1682 and 1701. Its crowning event came on 11 December 1718, when the war-mongering Swede King Karl XII was shot dead on the site (a monument now marks the spot).

The museums in the castle grounds cover various facets of the fortress' history. Downhill from the main entrance, the War Museum contains military artefacts and a variety of information on Halden's experiences of war from 1660 onwards, including details about the Norwegian independence movement in 1905. A tunnel leads up into Prince Christian's Bastion – the main vantage point for the fortress' defenders. A broader sweep of Halden's history is outlined in the Byen Brenner Museum ('City in Flames' Museum) about halfway down the main thoroughfare. Displays in the Gamle Kommandantbolig (Commandant's Residence) cover the history of trade and relations with neighbouring Sweden. The building itself was constructed between 1754 and 1758 and damaged by fire in 1826. After renovation it was used as a powder laboratory, armoury and barracks. Note the Fredrik V monogram over the doorway.

Perhaps the most interesting sites are the brewery, which once produced up to 3000L of beer a day, and the bakery ovens, which baked bread for up to 5000 soldiers. There's also a multimedia presentation and shop at the Infosenter, just inside the main entrance of the fortress.

There are many intriguing old buildings dotted around the fortress, but even better are the views over Halden.

Guided tours of the fortress and the buildings on the grounds are in Norwegian or English. At other times you can take an audio tour (50kr). There are also self-guided ghost tours, in which you're almost guaranteed to see the fortress' famous 'Lady in White'…

On Tuesday and Wednesday evenings in season various dance and musical shows are staged in the fortress grounds. The Wednesday night show is actually part of a national TV show, Allsangpå Grensen (Sing Along).

To reach the fortress from the town, a half-overgrown cobbled footpath climbs from the top of Festningsgata in Sørhalden (a neighbourhood of 19th-century sea captains' cottages) up the unkempt lilac-covered slopes. The road for cars leads up from the same street.