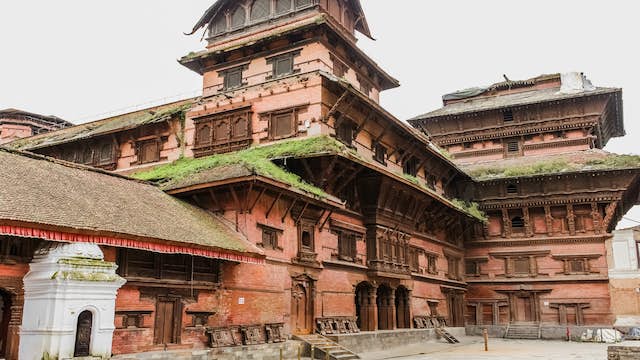 From the entrance gate of the Hanuman Dhoka palace you immediately enter its most famous chowk. Nasal Chowk was used for coronations, a practice that continued until as recently as 2001 with the crowning of King Gyanendra. The coronation platform is in the centre of the courtyard, while the earthquake-damaged Basantapur Tower looms over its southern end.

The rectangular courtyard is aligned north–south and the entrance is at the northwestern corner. Just by the entrance there is a surprisingly small but beautifully carved doorway, which once led to the Malla kings’ private quarters. Although the courtyard was constructed in the Malla period, many of the buildings around the square are later Rana constructions.

Beyond the door is the large Narsingha Statue, Vishnu in his man-lion incarnation, in the act of disembowelling a demon. The stone image was erected by Pratap Malla in 1673 and the inscription on the pedestal explains that he placed it here for fear that he had offended Vishnu by dancing in a Narsingha costume. The Kabindrapur Temple in Durbar Sq was built for the same reason.

Next is the Sisha Baithak, or Audience Chamber, of the Malla kings. The open verandah houses the Malla throne and contains portraits of the Shah kings.

At the northeastern corner of Nasal Chowk stands the Panch Mukhi Hanuman Temple, with its five circular roofs. Each of the valley towns has a five-storey temple, although it is the great Nyatapola Temple of Bhaktapur that is by far the best known. Hanuman is worshipped in the temple in Kathmandu, but only the priests may enter.

In Nepali, nasal means ‘dancing one’, and Nasal Chowk takes its name from the Dancing Shiva statue hidden in the whitewashed chamber on the northeastern side of the square.

On display along the east side of the courtyard are the palanquins used to carry Queen Aishwarya during her wedding to Birendra in 1970 and later to transport her body to her cremation in 2001. Also displayed here is the royal throne.