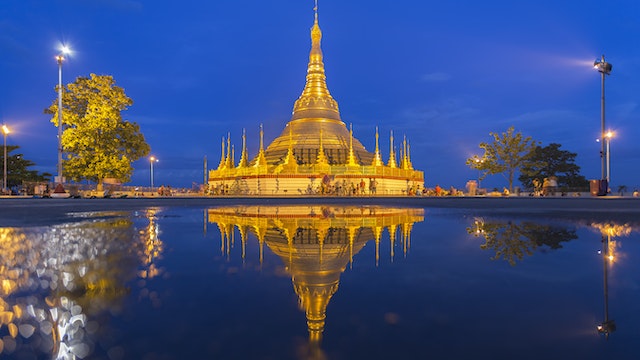 One of Buddhism's most sacred sites, the 326ft zedi (stupa) here is adorned with 27 metric tons of gold leaf, along with thousands of diamonds and other gems, and is believed to enshrine strands of the Gautama Buddha's hair as well as relics of three former buddhas.

Four entrance stairways lead to the main terrace. Visit at dawn if you want tranquillity; otherwise, pay your respects when the golden stupa flames crimson and burnt orange in the setting sun.

The following covers the history and layout of Shwedagon Paya. Freelance guides (they’ll locate you before you can find them) can provide more details. Tour agencies can also arrange guides; a good, regularly scheduled tour that also includes the surrounding area is offered by Khiri Travel.

Legend has it that there's been a stupa on Singuttara Hill for 2600 years, ever since two merchant brothers, Tapussa and Ballika, met the Buddha. He gave them eight of his hairs to take back to Myanmar, a land ruled by King Okkalapa. Okkalapa enshrined the hairs in a temple of gold, together with relics of three former buddhas, which was then enclosed in a temple of silver, then one of tin, then copper, then lead, then marble and, finally, one of plain iron-brick.

Archaeologists suggest that the original stupa was built by the Mon people some time between the 6th and 10th centuries. In common with many other ancient zedi in earthquake-prone Myanmar, it has been rebuilt many times. During the Bagan (Pagan) period of Myanmar’s history (10th to 14th centuries), the story of the stupa emerged from the mists of legend to become hard fact.

In the 15th century, the tradition of gilding the stupa began. Queen Shinsawbu, who was responsible for many improvements to the stupa, provided her own weight (88lb) in gold, which was beaten into gold leaf and used to cover the structure. Her son-in-law, Dhammazedi, went several better, offering four times his own weight and that of his wife in gold.

In 1612 Portuguese renegade adventurer Philip de Brito raided the stupa from his base in Thanlyin and carried away Dhammazedi's 300-ton bell, with the intention of melting it down for cannons. As the British were to do later with another bell, he accidentally dropped it into the river, where it remains.

During the 17th century the monument suffered earthquake damage on eight occasions. Worse was to follow in 1768, when a quake brought down the whole top of the zedi. King Hsinbyushin had it rebuilt to virtually its present height, and its current configuration dates from that renovation.

British troops occupied the compound for two years immediately after the First Anglo-Burmese War in 1824. In 1852, during the Second Anglo-Burmese War, the British again took the paya, the soldiers pillaged it once more and it remained under military control for 77 years, until 1929. Prior to the British takeover of southern Myanmar there had been defensive earthworks around the paya, but these were considerably extended by the occupiers. The emplacements for their cannons can still be seen outside the outer wall.

In 1871 the provision of a new hti (the umbrella-like decorative top of a stupa) by King Mindon Min from Mandalay caused considerable head-scratching for the British, who were not at all keen for such an association to be made with the still-independent part of Myanmar.

The huge earthquake of 1930, which totally destroyed the Shwemawdaw in Bago, caused only minor damage to Shwedagon. The following year it wasn't so lucky, when the paya suffered from a serious fire.

After another minor earthquake in 1970, the zedi was clad in bamboo scaffolding, which extended beyond King Mindon’s 100-year-old hti, and was refurbished. The stupa also had to be repaired following the 2008 Cyclone Nargis.

During recent centuries, Shwedagon Paya was the scene for much political activity during the Myanmar independence movement – Aung San Suu Kyi spoke to massive crowds here in 1988, and the temple was also at the centre of the monks’ protests in 2007.

The hill on which the stupa stands is 190ft above sea level, with the entire complex covering 114 acres. As is common with temples in Myanmar, the main terrace is approached by four zaungdan (covered walkways), each of which is flanked at its entrance by a pair of 30ft-tall chinthe (half-lion/half-dragon deities). If you don't want to climb the steps, there are elevators at the southern, eastern and northern entrances, while the western zaungdan has sets of escalators.

All but the western zaungdan are lined with stalls selling flowers – both real and beautifully made paper ones – for offerings, buddha images, ceremonial umbrellas, books, antiques, incense sticks and much more. There are also fortune tellers and money-exchange booths.

You emerge from the shade of the zaungdan into a visual cacophony of technicoloured glitter at the marble-floored main terrace, littered with pavilions and worship halls containing buddha images and two giant cast-iron bells.

At the centre of the terrace Shwedagon Paya sits on a square plinth, which stands 21ft above the clutter of the main platform and immediately sets the stupa above the lesser structures. Smaller stupas also sit on this raised platform – four large ones mark the four cardinal directions, four medium-sized ones mark the four corners of the plinth and 60 small ones run around the perimeter.

From this base, the zedi rises first in three terraces, then in ‘octagonal’ terraces and then in five circular bands. The shoulder of the bell is decorated with 16 ‘flowers’. The bell is topped by the ‘inverted bowl’, another traditional element of stupa architecture, and above this stand the mouldings, then the ‘lotus petals’. These consist of a band of downturned petals, followed by a band of upturned petals. The banana bud is the final element of the zedi before the jewel-encrusted hti tops it.

Around the stupa's base, eight planetary posts conform to the days of the week; locals pray at the station that represents the day they were born. If you want to join them, and don't know the day of your birth, the fortune tellers at the temple have almanacs that will provide the answer. Note that Wednesday is divided into births in the morning and births in afternoon – for the latter you worship at the Rahu post at the northwestern corner of the stupa base.

Before leaving the main terrace, pop into the small museum, which is chock-full of buddha statues and religious ornaments. Look for the scale model of the stupa and the beautiful painting of the temple by MT Hla. The photo gallery is also well worth a look, particularly for the close-up snaps it displays of the top of the stupa.