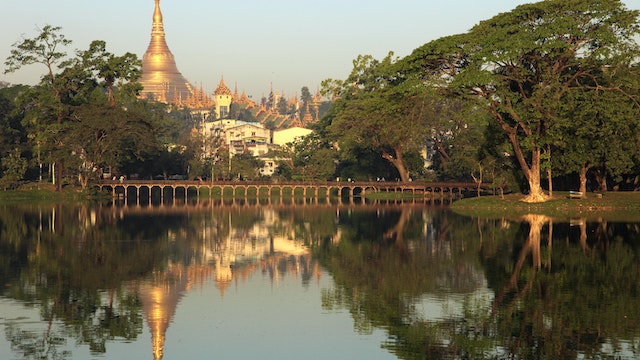 Also known as Royal Lake, this artificial lake built by the British as a reservoir is most attractive at sunset, when the glittering Shwedagon Paya is reflected in its calm waters. The boardwalk, which runs mainly along the lake's southern and western sides (and which is free to wander), is also an ideal place for an early-morning jog or stroll.

Just east of the shuttered Kandawgyi Palace Hotel, on the southern side of the lake, floats a Shin Upagot shrine. Upagot is a Bodhisattva (Buddhist saint) who is said to protect human beings in moments of mortal danger.

The eastern end of the lake, for which you'll have to pay the admission charge, is dominated by a small park, a kids' playground and Karaweik Palace, a reinforced-concrete reproduction of a royal barge. There are plenty of lakeside cafes here that are good spots for a drink at sunset.

On the lake's north side, the quirky Utopia Tower is a giant pile of artificial rocks housing bars, karaoke, a massage parlour and, on the 5th floor, a viewing deck.

Also here is the new Myanmar Aquarium which opened at the end of 2019.