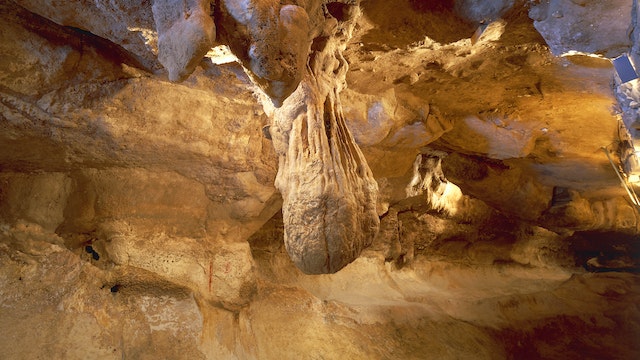 The reason to head to Birżebbuġa is to see the Għar Dalam Cave & Museum, 500m north on the main road from Valletta. Għar Dalam (aar-da-lam; the name means 'cave of darkness') is a 145m-long cave in the Lower Coralline Limestone. It has yielded a magnificent harvest of fossil bones and teeth. The lowermost layers of the cavern, more than 500,000 years old, yielded remains belonging to dwarf elephants, hippopotamuses, micro-mammals and birds.

The animals are all of European type, suggesting that Malta was once joined to Italy, but not to northern Africa. It's also where the first signs of human habitation on Malta, from 7400 years ago, have been discovered, with remains including pottery dating back to 5200 BC and Neanderthal teeth found in the top layer.

The museum at the entrance contains an exhibition hall with displays on how the cave was formed and how the remains of such animals came to be found here and their development in response to local conditions, as they evolved in different ways to such creatures elsewhere. In the older part of the museum are display cases mounted with thousands and thousands of bones and teeth. Beyond the museum a path leads down through gardens to the mouth of the cave, where a walkway leads 50m into the cavern. A pillar of sediment has been left in the middle of the excavated floor to show the stratigraphic sequence.