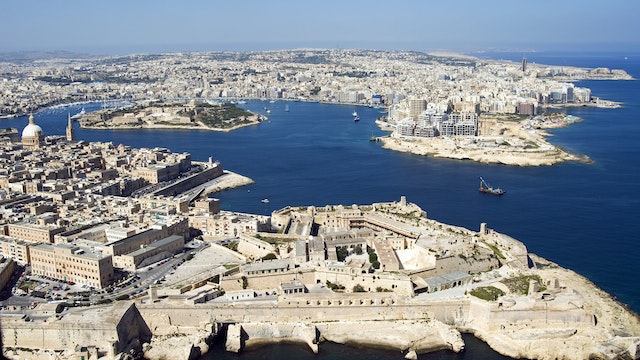 Guarding Marsamxett and Grand Harbours is Fort St Elmo, named after the patron saint of mariners. The fort was built by the Knights in 1552 in just four months to guard the harbours on either side of the Sceberras Peninsula, and bore the brunt of Turkish arms during 1565's Great Siege. After restoration, the fort reopened in 2015, and now contains the National War Museum, which covers Malta's wartime history including the Great Siege and the country's ordeal during WWII.

The museum showcases absorbing audiovisual displays, bringing history to life and illustrating aspects of war such as the struggle to get supplies through to the islands under German bombardment. Artefacts include the Gloster Gladiator biplane called Faith (minus wings), the sole survivor of the three planes that so valiantly defended the island when Italy declared war in 1940. Pride of place goes to the George Cross medal that was awarded to the entire population of Malta in 1942.

The courtyard outside the entrance to the fort is studded with the lids of underground granaries. You can visit the parade ground and the 1559 chapel where Knights fought to the death during the siege trying to protect the altar, as well as the later 1729 church.

The military pageant In Guardia takes place here between October and June.