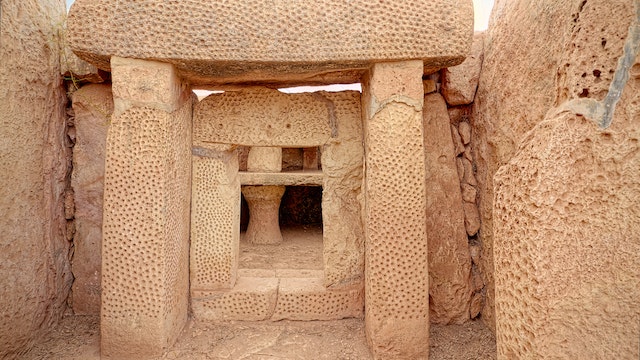 The megalithic temples of Ħaġar Qim (adge-ar eem; 'standing stones') and Mnajdra (mm-nigh-dra) are the best preserved and most evocative of Malta's prehistoric sites, with an unparalleled location atop sea cliffs. Permanent tentlike canopies have been erected over the temples to protect them from the elements.

There's an informative hands-on visitors centre to explain the background to the structures, a children's room where kids can build a temple out of blocks, and an atmospheric if not all that informative 4D film introduction.

Ħaġar Qim is the first temple you reach after the visitors' centre. The facade, with its trilithon entrance (two upright stones with a third across the top as a lintel), has been restored, and gives an idea of what it may once have looked like. The temples were originally roofed over, probably with corbelled stone vaults, but these have long since collapsed.

Before going in, look round the corner to the right – the megalith here is the largest in the temple, weighing more than 20 tonnes. The temple consists of a series of interconnected, oval chambers with no uniform arrangement, and differs from other Maltese temples in lacking a regular trefoil plan. In the first chamber on the left is a little altar post decorated with plant motifs, and in the second there are a couple of pedestal altars. The 'fat lady' statuettes and the 'Venus de Malta' figurine that were found here are on display in the National Museum of Archaeology in Valletta.

Mnajdra, a 700m walk downhill from Ħaġar Qim, is more elaborate. There are three temples side by side, each with a trefoil plan and a different orientation. The oldest temple is the small one on the right, aligned towards the southwest and Filfla Island. The central temple, pointing towards the southeast, is the youngest. All date from between 3600 and 3000 BC.

In the right-hand apse there is a separate chamber entered through a small doorway, with an 'oracle hole' to its left. The function of this is unknown.

It has been claimed that the southern temple is full of significant solar alignments. At Ħaġar Qim at sunrise during the summer solstice, a sunbeam enters a circular opening in the back of the right-hand apse in the left rear chamber. Around the summer (June) and winter (December) solstices and the spring (March) and autumn (September) equinoxes, Heritage Malta (www.heritagemalta.org) organises special guided tours to experience these alignments at the Mnajdra Temples (€25 per person).

There are some waymarked nature trails in the area surrounding the temples, which allow for splendid views out to sea.

On the cliff top to the southeast of Mnajdra is a 17th-century watchtower and a memorial to Sir Walter Congreve (Governor of Malta 1924–27), who was buried at sea off this point. You can hike west along the cliffs to Għar Lapsi. The tiny uninhabited island Filfla, 5km offshore, is clearly visible.