in Roppongi, Akasaka & Around 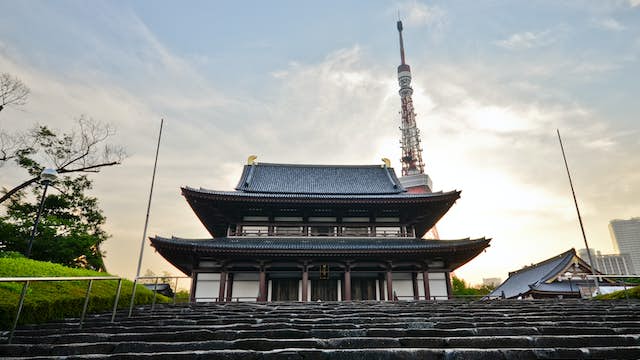 One of the most important temples of the Jōdō (Pure Land) sect of Buddhism, Zōjō-ji dates from 1393 and was the funerary temple of the Tokugawa regime. It's an impressive sight, particularly the main gate, Sangedatsumon, constructed in 1605, with its three sections designed to symbolise the three stages one must pass through to achieve nirvana. The Daibonsho (Big Bell; 1673) is a 15-tonne whopper considered one of the great three bells of the Edo period.

Like many sights in Tokyo, Zōjō-ji's original structures have been relocated, and were subject to war, fire and other natural disasters. It has been rebuilt several times in recent history, the last time in 1974.

On the temple grounds, there is a large collection of statues of the bodhisattva Jizō, said to be a guide during the transmigration of the soul, as well as a majestic Himalayan cedar planted by US president Ulysses S Grant in 1879.