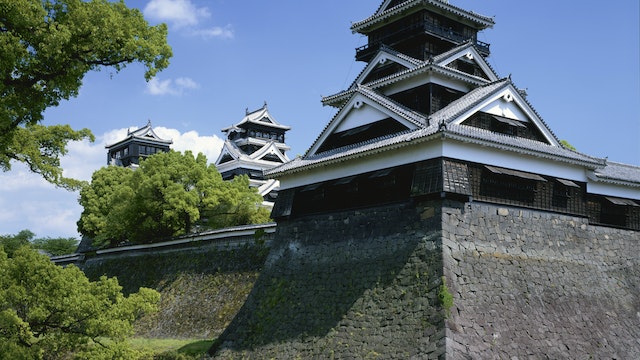 Dominating the skyline, Kumamoto's robust castle is one of Japan's best, built in 1601–07 by daimyō Katō Kiyomasa, whose likeness is inescapable around the castle (look for the distinctive tall pointed hat). From 1632 it was the seat of the powerful Hosokawa clan. Unfortunately, the castle, many outbuildings and much of the grounds are closed indefinitely due to earthquake damage, but the site is still worth seeing from the street.

Though it's a reconstruction, Kumamoto-jō is best known as the scene of the story of the last samurai. During the 1877 Satsuma Rebellion, rebels against the new imperial order held out through a 50-day siege here before the castle was burned, leaving the Meiji government to rule unfettered.

Outside the main keep but still within the castle walls, several museums remain open, including the Kumamoto Prefectural Museum of Art, its postmodern Chibajo branch and a crafts centre.