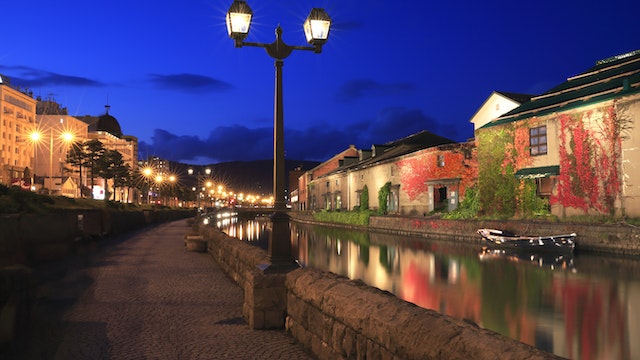 Historic Otaru canal is lined with warehouses from the late 19th and early 20th centuries when this port city served as the financial centre of Hokkaidō and a bustling center of trade with Russia and China. This was a time when traditional Japanese architecture was infused with Western-style building techniques, leading to some intriguing architectural styles being on display.

Most of the canal-lined spots have been restored and now house museums and cafes. Unfortunately the canal itself is half-buried by a major thoroughfare, despite the best lobbying efforts of local preservationists. Still, a stroll along the canal's banks is a very pleasant way to spend an afternoon, particularly in February when twinkling lanterns line the river as part of the town's Snow Light Path Festival.

The view of the canal is even prettier from the vantage point on the water. Cruises depart from Chūō-bashi and last 40 minutes; though recommended, no advance booking is necessary.

Otaru is an easy day trip from Sapporo, though it also works as a convenient stopover on the way to Niseko. There are plenty of places to stay here, the best (and priciest) of which have rooms overlooking the bay.

For proximity to the canal, you can't beat Hotel Nord Otaru or Hotel Sonia, both located right on the canal bank. For those on a budget, the excellent Otarunai Backpackers' Hostel Morinoki is around a 15-minute walk from the canal side.