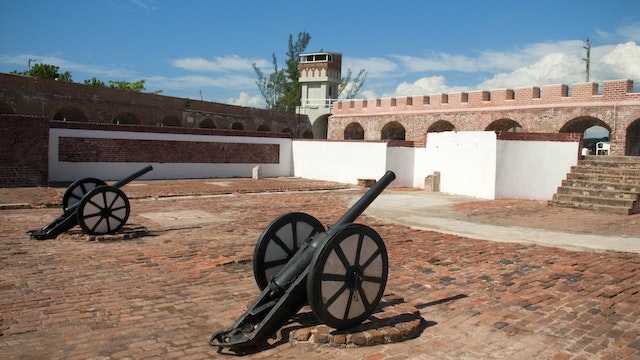 Jamaica’s latitude and longitude are measured from the flagstaff of Fort Charles, a weathered redoubt originally laid in 1655, and the only one of the town’s forts to survive the 1692 earthquake. Originally washed by the sea on three sides, the fort is now firmly landlocked due to the gradual silt build-up.

At its peak, 104 guns protected the fort. Many cannons still point out from their embrasures along the restored battlements. In the center of the courtyard stands the small, well-presented Maritime Museum, containing a miscellany of objects – from glassware and pottery to weaponry – retrieved from the sunken city. Horatio Nelson, who later became Britain’s greatest naval hero, lived in the small ‘cockpit’ while stationed here for 30 months.

Behind the museum is the raised platform known as Nelson’s Quarterdeck, where a young Nelson kept watch for enemy ships amid fears of a French invasion. A plaque on the wall of the King’s Battery commemorates his time here.

A small redbrick artillery store, the 1888 Giddy House, sits alone just behind the fort. The 1907 earthquake briefly turned the spit to quicksand and one end of the building sank, leaving the store at a lopsided angle. Next to the Giddy House is a gun emplacement with a massive cannon – which also keeled over in 1907.