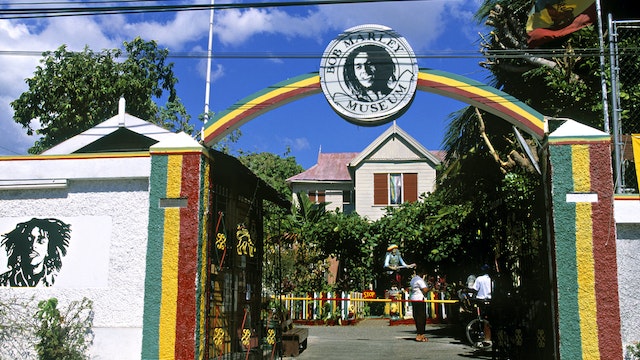 The large, creaky, colonial-era wooden house on Hope Rd, where Bob Marley lived and recorded from 1975 until his death in 1981, is the city’s most-visited site. Today the house functions as combined tourist attraction, museum and shrine, and much remains as it was in Marley’s day.

The hour-long tour provides fascinating insights into the reggae superstar's life after moving Uptown. His gold and platinum records are there on the walls, alongside Marley’s favorite denim stage shirt, and the Order of Merit presented by the Jamaican government. One room is entirely wallpapered with media clippings from Marley’s final tour; another contains a replica of Marley’s original record shop, Wail’n Soul’m. Marley’s simple bedroom has been left as it was, and next to it is the kitchen were he'd fix healthy fresh juices. At the rear of the house you'll see the spot where gunmen attempted to kill him in 1976.

The former recording studio out back is now an exhibition hall with some wonderful photos of Bob, and a theater, where the tour closes with a 20-minute film. Photography isn't allowed inside the house, but you'll almost certainly be instructed to sing 'One Love' at some point. It's possible to buy a joint ticket that includes entry to the Tuff Gong studios.