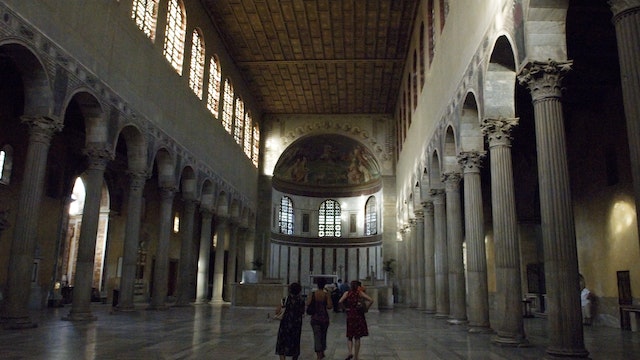 This solemn basilica, one of Rome's most beautiful early Christian churches, was founded by Peter of Illyria around AD 422. It was enlarged in the 9th century and again in 1216, just before it was given to the newly founded Dominican order – note the tombstone of Muñoz de Zamora, one of the order’s founding fathers, in the nave floor. The interior was further modified by Domenico Fontana in 1587. A 20th-century restoration subsequently returned it to its original look.

One of the few elements to have survived since the 5th century are the basilica’s cypress-wood doors. These feature 18 carved panels depicting biblical events, including one of the oldest Crucifixion scenes in existence. It’s quite hard to make out in the top left, but it depicts Jesus and the two thieves, although, strangely, not their crosses.

Inside, 24 custom-made columns support an arcade decorated with a faded red-and-green frieze. Light streams in from high nave windows that were added in the 9th century, along with the carved choir, pulpit and bishop’s throne.

Behind the church is a garden and a meditative 13th-century cloister.