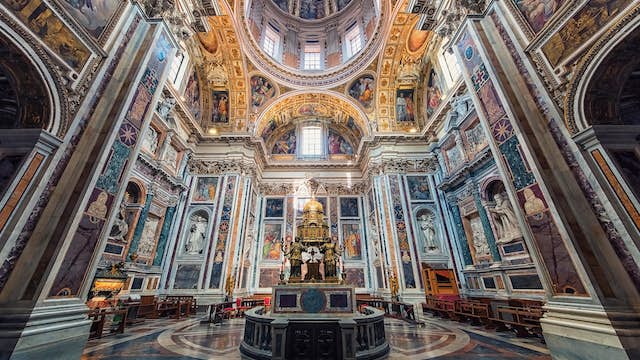 One of Rome's four patriarchal basilicas, this 5th-century church stands on Esquiline Hill's summit, on the spot where snow is said to have miraculously fallen in the summer of AD 358. Every year on 5 August the event is recreated during a light show in Piazza Santa Maria Maggiore. Much altered over the centuries, the basilica is an architectural hybrid with 14th-century Romanesque campanile, Renaissance coffered ceiling, 18th-century baroque facade, largely baroque interior and a series of glorious 5th-century mosaics.

The exterior fronting Piazza Santa Maria Maggiore is decorated with glimmering 13th-century mosaics that are screened by Ferdinand Fuga's baroque loggia (1741). Rising behind, the campanile – Rome's tallest – tops out at 75m.

The vast interior retains its original structure, despite the basilica's many overhauls. Particularly spectacular are the 5th-century mosaics in the triumphal arch and nave, depicting Old Testament scenes. The central image in the apse, signed by Jacopo Torriti, dates from the 13th century and represents the coronation of the Virgin Mary. Beneath your feet, the nave floor is a fine example of 12th-century Cosmati paving.

The 18th-century baldachin over the high altar is heavy with gilt cherubs; the altar itself is a porphyry sarcophagus, which is said to contain the relics of St Matthew and other martyrs. A plaque embedded in the floor to the right of the altar marks the spot where Gian Lorenzo Bernini and his father Pietro are buried. Steps lead down to the confessio (a crypt in which relics are placed), where a statue of Pope Pius IX kneels before a reliquary that is claimed to contain a fragment of Jesus' manger.

The sumptuously decorated Cappella Sistina, last on the right, was built by Domenico Fontana in the 16th century and contains the tombs of Popes Sixtus V and Pius V. Not as sumptuous but far more beautiful is the Cappella Sforza on the left, which was designed by Michelangelo.

Through the souvenir shop on the right-hand side of the church is the Museo del Tresoro (Treasury Museum) with a glittering collection of religious artefacts. Most interesting, however, is the Loggia delle Benedizioni (upper loggia), accessible only by 30-minute guided tours (in English; book at the basilica entrance). Here you can get a close look at the 13th-century mosaics on the facade, which were created by Filippo Rusuti.