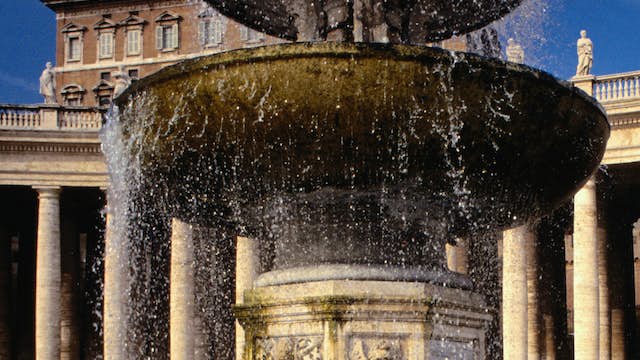 Pilgrims and art lovers flock to this 5th-century basilica for two reasons: to marvel at Michelangelo's colossal Moses sculpture (1505) and to see the chains that are said to have bound St Peter when he was imprisoned in the Carcere Mamertino ('in Vincoli' means 'in Chains'). Also of note is a lovely 7th-century mosaic icon of St Sebastian. Access to the church is via a steep flight of steps leading up from Via Cavour and passing under a low arch.

The church was built specially to house the shackles of St Peter, which had been sent to Constantinople after the saint's death, but were later returned as relics. They arrived in two pieces and legend has it that when they were reunited they miraculously joined together. They are now displayed under the altar.

To the right of the altar, Michelangelo's Moses forms the centrepiece of his unfinished tomb for Pope Julius II. The prophet strikes a muscular pose with well-defined biceps, a magnificent waist-length beard and two small horns sticking out of his head. These were inspired by a mistranslation of a biblical passage: where the original said that rays of light issued from Moses' face, the translator wrote 'horns'. Michelangelo was aware of the mistake, but gave Moses horns anyway. Flanking Moses are statues of Leah and Rachel, probably completed by Michelangelo's students. A statue of Julius lolls somewhat saucily in the centre, above Moses.

The tomb, despite its imposing scale, was never finished – Michelangelo originally envisaged 40 statues, but got sidetracked by the Sistine Chapel – and Pope Julius II was buried in St Peter's Basilica.