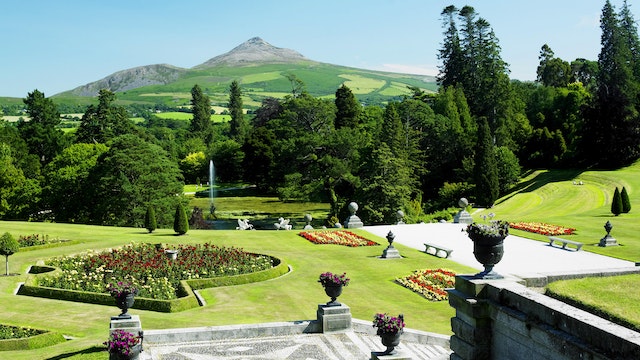 Wicklow's most visited attraction is this magnificent 64-sq-km estate, whose main entrance is 500m south of Enniskerry. At the heart of it is an elegant Palladian mansion, but the real draws are the formal gardens and the stunning views that accompany them. Most of the house is not open to the public, but there's a fine cafe and several gift and homewares shops, while the grounds are home to two golf courses and the best hotel in Wicklow.

The estate has existed more or less since 1300, when the LePoer (later anglicised to Power) family built themselves a castle here. The property changed Anglo-Norman hands a few times before coming into the possession of Richard Wingfield, newly appointed Marshall of Ireland, in 1603. His descendants were to live here for the next 350 years. In 1730 the Georgian wunderkind Richard Cassels (or Castle) was given the job of building a 68-room Palladian-style mansion around the core of the old castle. He finished the job in 1741, but an extra storey was added in 1787 and other alterations were made in the 19th century.

The Wingfields left in the 1950s, after which the house had a massive restoration. Then, on the eve of its opening to the public in 1974, a fire gutted the whole building. The estate was eventually bought by the Slazenger sporting-goods family, who have overseen a second restoration as well as the addition of all the amenities the estate now has to offer, including the two golf courses and the fabulous hotel, part of Marriott's Autograph collection.

The 20-hectare landscaped gardens are the star attraction, originally laid out in the 1740s but redesigned in the 19th century by gardener Daniel Robinson. Robinson was one of the foremost horticulturalists of his day, and his passion for growing things was matched only by his love of booze: the story goes that by a certain point in the day he was too drunk to stand and so insisted on being wheeled around the estate in a barrow.

Perhaps this influenced his largely informal style, which resulted in a magnificent blend of landscaped gardens, sweeping terraces, statuary, ornamental lakes, secret hollows, rambling walks and walled enclosures replete with more than 200 types of trees and shrubs, all designed to frame the stunning natural backdrop of the Great Sugarloaf mountain. Tickets come with a map laying out 40-minute and hour-long walks around the gardens. Don't miss the exquisite Japanese Gardens or the Pepperpot Tower, modelled on a 7.5cm-tall pepper pot owned by Lady Wingfield. The animal cemetery is the final resting place of the Wingfield pets and even one of the family's favourite milking cows. Some of the epitaphs are surprisingly personal.

The house itself is every bit as grand as the gardens, but with most areas closed to the public, there's not much to see beyond the bustle of the ground-floor cafe and gift shop.

A 6km drive to a separate part of the estate takes you to the 121m-high Powerscourt Waterfall – walking from house to falls is not recommended as the route lies on narrow roads with no footpath. It's the highest waterfall in Ireland, and at its most impressive after heavy rain. A nature trail has been laid out around the base of the waterfall, taking you past giant redwoods, ancient oaks, beech, birch and rowan trees. There are plenty of birds in the vicinity, including the chaffinch, cuckoo, chiffchaff, raven and willow warbler.