in The Golden Circle 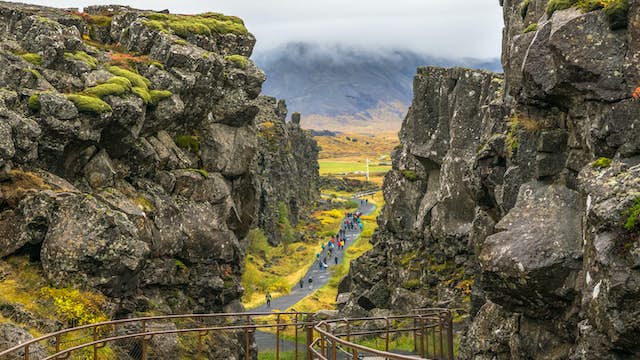 The world’s oldest parliament, Althingi (pronounced ál-thingk-ee; also called Alþing) was uniquely situated at this monumental site where two tectonic plates meet. In AD 930, Vikings would hold meetings among this awe-inspiring geology, which created a natural amphitheatre. A boardwalk snakes between this enormous crevice on the earth’s surface, below deep canyon walls. The gap between these North American and Eurasian tectonic plates continues to grow by 2cm each year.

At the site is the significant Oxara waterfall. In the Middle Ages, people were put to their death by drowning, in this very pool below the 20m cascade. To the south sits Thingvallavatn, the largest natural lake in Iceland, containing one of the most unusual diving opportunities out there. Here you can descend into Silfra Gorge's glacial waters between two tectonic plates.