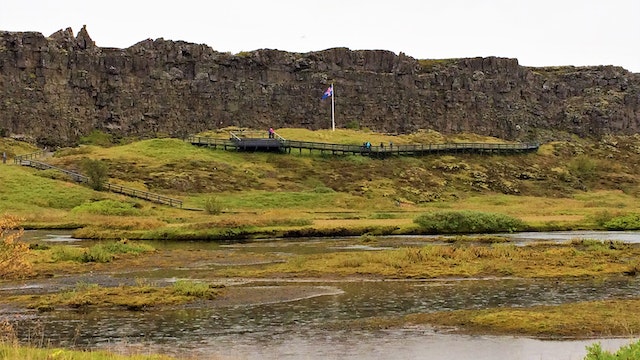 Near the dramatic Almannagjá fault and fronted by a boardwalk is the Lögberg (Law Rock), where the Alþingi (Parliament) convened annually. This was where the lögsögumaður (law speaker) recited the existing laws to the assembled parliament (one-third each year). After Iceland’s conversion to Christianity, the site shifted to the very foot of the Almannagjá cliffs, which acted as a natural amplifier, broadcasting the voices of the speakers across the assembled crowds. That site is marked by the Icelandic flag.

Decisions were reached by the Lögrétta (Law Council), made up of 146 men (48 voting members, 96 advisers and two bishops), who are thought to have assembled at Neðrivellir (Low Fields), the flat area in front of the cliffs.