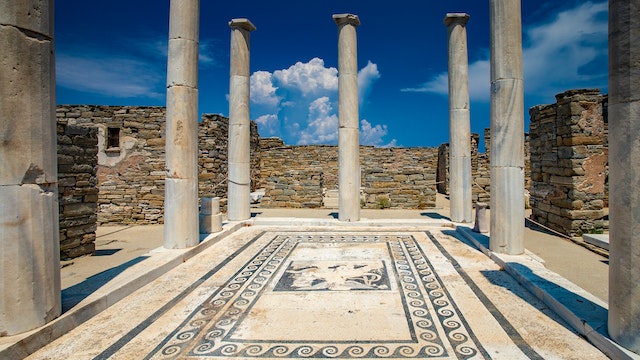 Delos has a special place in Greek mythology. When Leto was pregnant with twins Apollo and Artemis, she was relentlessly pursued by a vengeful Hera – the wife of their father, Zeus – before giving birth on this sacred island. The ancient town that sprang up here was a bustling commercial centre as well as shrine. Within the extensive ruins of this Unesco World Heritage Site, it's not difficult to imagine Ancient Delos in all its original splendour.

Boats for Delos leave Hora (Mykonos) at 9am, 10am, 11.30am and 5pm from May to October, returning at noon, 1.30pm, 3pm and 7.30pm. On Mondays throughout the year, and daily from November to April, only the 10am boat operates, returning at 1.30pm. The journey takes 30 minutes. Tickets are sold from the Delos Boat Ticket Kiosk, located at the foot of the jetty at the southern end of Mykonos' old harbour. When buying tickets, find out which boat you can return on.

On the island, the ticket office sells Delos guidebooks but there are also detailed information boards scattered around the site. Visitors are given a map with three walking routes marked on it, taking from 1½ to five hours.

While many significant finds from Delos are in the National Archaeological Museum in Athens, the island's museum retains an interesting collection, including the originals of many of the frescoes, mosaics and statues that were removed from the site and replaced with replicas in situ.

The key areas to explore are the Sanctuary of Apollo, the spiritual heart of the complex, to the left of the ferry dock. Two large stoas (colonnaded porticos) lined the Sacred Way leading to the Propylaea, the monumental entrance to a complex of magnificent temples and treasuries. Three temples to Apollo stood side by side, facing a colossal 9m-high statue of the god. Also within the compound is the Artemision, containing the Temple of Artemis. Beyond here is the much-photographed Terrace of the Lions. These proud marble beasts were offerings from the people of Naxos, presented to Delos in the 7th century BC to guard the Sacred Lake (drained since 1925 to prevent malarial mosquito-breeding) where Leto gave birth to her twins.

To the right of the dock is the Theatre Quarter, where Delos’ wealthiest inhabitants lived in houses built around peristyle courtyards, with intricate, colourful mosaics. Beyond this are the Sanctuaries of the Foreign Gods and the path leading up Mt Kynthos (113m); it’s worth the steep climb for the terrific views of the encircling islands.