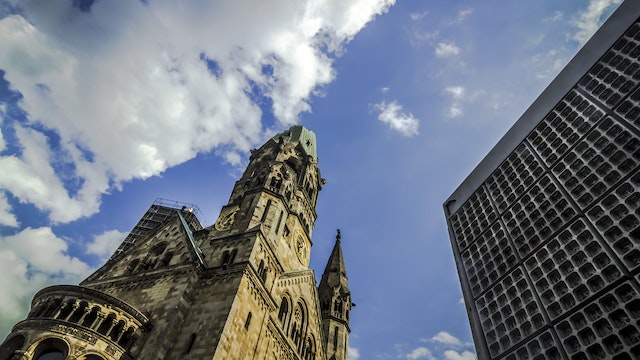 Allied bombing in 1943 left only the husk of the west tower of this once magnificent neo-Romanesque church standing. Now an antiwar memorial, it stands quiet and dignified amid the roaring traffic. Historic photographs displayed in the Gedenkhalle (Hall of Remembrance), at the bottom of the tower, help you visualise the former grandeur of this 1895 church. The adjacent octagonal hall of worship, added in 1961, has glowing midnight-blue glass walls and a giant 'floating' Jesus.

The Hall of Remembrance also contains remnants of the elaborate mosaics that once swathed the original church, depicting heroic moments from Kaiser Wilhelm I's life, among other scenes. Note the marble reliefs, liturgical objects and two symbols of reconciliation: an icon cross donated by the Russian Orthodox church and a copy of the Cross of Nails from Coventry Cathedral, which was destroyed by Luftwaffe bombers in 1940.

The bell tower and new octagonal church were designed by Egon Eiermann, one of Germany's most prominent post-WWII architects. The huge golden statue of the resurrected Christ above the altar is made of tombac, a type of brass with a high copper content, and weighs 300kg. Also note the Stalingrad Madonna (a charcoal drawing) against the north wall.