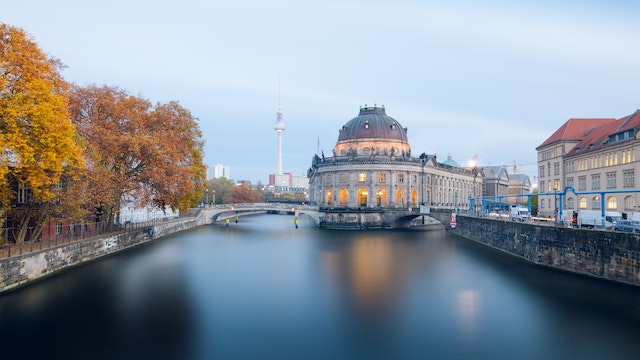 Museumsinsel is situated on the northern half of Spreeinsel, a small island in the River Spree, where Berlin's settlement began in the 13th century. Spread across five buildings constructed under Prussian rulers, Berlin's most important treasure trove spans 6000 years’ worth of art, artifacts, sculpture and architecture from Europe and beyond.

The first facility to open was the Altes Museum, which presents Greek, Etruscan and Roman antiquities. Behind it, the Neues Museum showcases the Egyptian collection, most famously the Nefertiti Bust, and also houses the Museum für Vor- und Frühgeschichte (Museum of Pre- and Early History).

The temple-like Alte Nationalgalerie focuses on 19th-century European art, while the island's top drawcard, the Pergamonmuseum, displays monumental architecture from ancient worlds, including the stunning Ishtar Gate from Babylon. Last but not least, the Bode-Museum, at the island's northern tip, is famous for its medieval sculptures.

In addition to the museums, Museumsinsel is also home to the lovely Lustgarten park and Berliner Dom (Berlin Cathedral).

The history of Museumsinsel

Each of Museumsinsel’s five buildings were designed by different architects, who were commissioned by a succession of Prussian kings between 1830 and 1930.

The Altes Museum (originally known as the Königliches Museum) was the first cultural facility to open on Museumsinsel in 1830. It is considered the most mature work by Prussia’s most important architect, Karl Friedrich Schinkel. Dedicated to Enlightenment ideals of furthering art and science, the museum made significant historical collections and artworks – including Old Masters paintings, prints and drawings – publicly accessible for the very first time.

The Neues Museum (New Museum) was conceived as an extension for the overflowing Königliches Museum, which was struggling to display its growing number of artifacts. It was designed in neoclassical and Renaissance Revival styles and opened in 1855. As a consequence, the existing Königliches Museum was eventually renamed to the Altes Museum (Old Museum).

By 1876, the Alte-National Galerie, which takes the form of a traditional Greek temple, opened its doors to display paintings and sculptures donated by a prominent banker. This was followed by the opening of the neo-baroque Kaiser Friedrich Museum, today’s Bode-Museum, in 1904, and the Pergamonmuseum in 1930. Exactly 100 years after construction began on the original museum, Museumsinsel was finally complete.

World War II, however, brought a turbulent period to the Museumsinsel. Bombings destroyed entire sections of buildings and bullet holes pockmarked facades. The worst hit was the Neues Museum, which, as a consequence, was disused until the 2000s.

In the 1950s and 1960s, the Altes Museum and Alte-Nationalgalerie were renovated and reopened, along with the Pergamonmuseum in 1959 (although a thorough restoration only began in 2013 and remains ongoing). However, in a divided city, the museum complex fell on the East Berlin side of the wall, making the facilities difficult to access for those in West Berlin during the years following the war.

In the direct aftermath of the fighting, items from the museums were also taken as war trophies, notably by USSR forces. Most items have since been returned, but some still remain outside Germany. The Trojan Gold (a collection of gold from ancient Troy), for example, remains on display to this day at the Pushkin Museum of Fine Arts in Moscow.

After the reunification of Germany in 1990, it was decided that the complex should be restored and renovated for contemporary times. In 1999, the government developed what was termed the “master plan” – a decade-long, billion-euro project to transform Museumsinsel into the modern spectacle that greets visitors today. That same year, Museumsinsel was declared a Unesco World Heritage Site.

Besides overall restoration work, the master plan included the reopening of the Neues Museum (which had remained closed since the war) in 2009, with a brand-new visitor center and art gallery – both designs were spearheaded by British “starchitect” David Chipperfield. More recently, the Humboldt Forum, encompassing the Ethnological Museum of Berlin and the Museum of Asian Art, opened in late 2020 in the Berlin Palace opposite the Lustgarten park.

Like many large historical museums in major European cities, the facilities on Museumsinsel face a growing backlash over displaying ancient artifacts taken from other countries following historical wars, expeditions and invasions. To aid in addressing this issue, a handful of items, including the 3000-year-old Sphinx of Hattusa from Turkey (formerly on display in the Pergamonmuseum), have been returned to their country of origin. In addition, in 2021 a new government initiative, MuseumsLab, was launched, with an aim of decolonizing Germany’s museums and “fostering international cooperation”.

Museumsinsel is one of Berlin’s busiest areas. The grounds, indoors and outdoors, are always bustling with school children, buskers and tour groups. As such, use common sense and be aware of potential pickpockets.

The most budget-friendly way to visit the different museums is by getting the WelcomeCard for Museum Island. For one price, it grants access to the island’s five museums as well as free public transport in central Berlin over three consecutive days. Alternatively, the Museum Pass Berlin offers entry into Musueminsel and some 30 other museums such as the Deutsches Historisches Museum (German Historical Museum) and Jüdisches Museum (Jewish Museum).

Museumsinsel is easily accessible by public transport. The U5 line stops right outside at Unter den Linden station. Museumsinsel is also a short walking distance from the S-Bahn stations Friedrichstraße and Hackescher Markt. Trams M1 and 12 will take you to nearby Kupfergraben, while buses 100 and 200 stop at the Lustgarten on Unter den Linden.