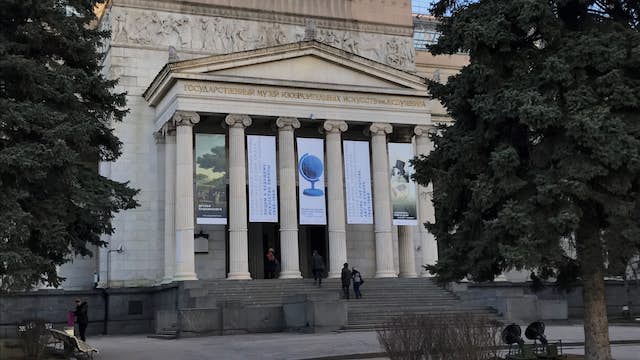 This is Moscow’s premier foreign-art museum, split over three branches and showing off a broad selection of European works, including masterpieces from ancient civilisations, the Italian Renaissance and the Dutch Golden Age. To see the incredible collection of Impressionist and post-Impressionist paintings, visit the 19th & 20th Century Art Gallery. The Museum of Private Collections shows off complete collections donated by private individuals.

What's left in the main building is also impressive, with many masterpieces from the Italian Renaissance. Artists such as Botticelli, Tiepolo and Veronese are all represented. The highlight is perhaps the Dutch masterpieces from the 17th century, the so-called Golden Age of Dutch art. Rembrandt is the star of the show, with many paintings on display, including his moving Portrait of an Old Woman. The rest of Europe is also well represented from this period.

The Ancient Civilization exhibits contain a surprisingly excellent collection, complete with ancient Egyptian weaponry, jewellery, ritual items and tombstones. Most of the items were excavated from burial sites, including two haunting mummies. Another room houses the impressive ‘Treasures of Troy’ exhibit, with excavated items dating to 2500 BC. A German archaeologist donated the collection to the city of Berlin, from where it was appropriated by the Soviets in 1945.

The Greek and Italian Courts contain examples from the museum's original collection, which was made up of plaster-cast reproductions of the masterpieces from Ancient Greece and Rome, as well as from the Renaissance.

The 17th and 18th centuries dominate the 2nd floor, with several sections devoted to Italian and French artists. There is a separate gallery for the rococo period, featuring some appropriate dreamy paintings by Boucher.

The main building will remain open during the construction of the new museum complex on ul Volkhonka, which is expected to be completed in 2019. After the opening of the new complex, the exhibits are likely to change locations.