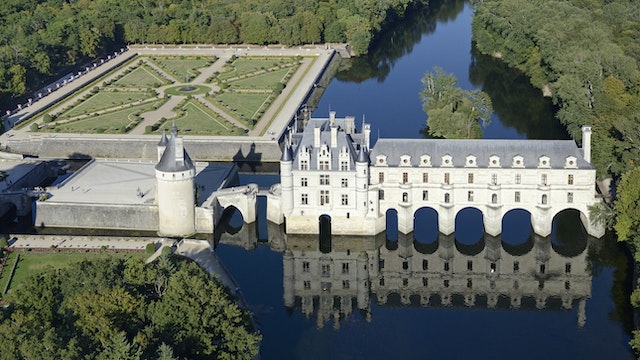 Spanning the languid Cher River atop a graceful arched bridge, Chenonceau is one of France's most elegant châteaux. It's hard not to be moved and exhilarated by the glorious setting, the formal gardens, the magic of the architecture and the château's fascinating history, shaped by a series of powerful women. The interior is decorated with rare furnishings and an art collection that includes works by Tintoretto, Correggio, Rubens, Murillo, Van Dyck and Ribera (look for an extraordinary portrait of Louis XIV).

This spectacular complex is largely the work of several remarkable women (hence its nickname, Le Château des Dames). The initial phase of construction started in 1515 for Thomas Bohier, a court minister of Charles VIII's, although much of the work and design was actually overseen by his wife, Katherine Briçonnet.

The distinctive arches and the eastern formal garden were added by Diane de Poitiers, mistress of Henri II. Following Henri’s death Catherine de Médicis, the king’s scheming widow, forced Diane (her second cousin) to exchange Chenonceau for the rather less grand Château de Chaumont. Catherine completed the château's construction and added the yew-tree maze and the western rose garden. Louise of Lorraine’s most singular contribution was her black-walled mourning room (restored in 2018) on the top floor, to which she retreated when her husband, Henri III, was assassinated in 1589.

Chenonceau had an 18th-century heyday under the aristocratic Madame Dupin, who made the château a center of fashionable society; guests included Voltaire and Rousseau. During the Revolution, at the age of 83, she was able to save the château from destruction at the hands of angry mobs thanks to quick thinking and some strategic concessions.

The château's pièce de résistance is the 60m-long, chequerboard-floored Grande Galerie over the Cher, scene of many an elegant party hosted by Catherine de Médicis and Madame Dupin. Used as a military hospital during WWI, it served from 1940 to 1942 as an escape route for résistants, Jews and other refugees fleeing from the German-occupied zone (north of the Cher) to the Vichy-controlled zone (south of the river). The upper level of the gallery, the Galerie Médicis, has a well-presented exhibition (in French and English) on the château’s colorful history and the women who moulded it.

Tickets can be bought online in advance of your visit, or at the ticket office upon arrival. The excellent audio guide is available in 16 languages. There's a great deal to see, so plan on spending at least half a day here. Wheelchairs are available free of charge: there's a ramp into the château, and toilets, the shop and the gardens are fully accessible.

There are several picnic areas to choose from, both covered and uncovered. From mid-March to mid-November, there's a gastronomic French restaurant called L'Orangerie (menus €32 and €39.50, mains €20 to €26) and a self-service restaurant with a creperie serving sandwiches, pastries and other freshly prepared food. There's wine tasting in the château's historic wine cellar, the Cave des Dômes.

Getting to the château

The château is 20 miles (33km) east of Tours, 8 miles (13km) southeast of Amboise and 25 miles (40km) southwest of Blois. From the town of Chenonceaux (spelt with an x), just outside the château grounds, trains go to Tours (€7, approx 30 minutes).