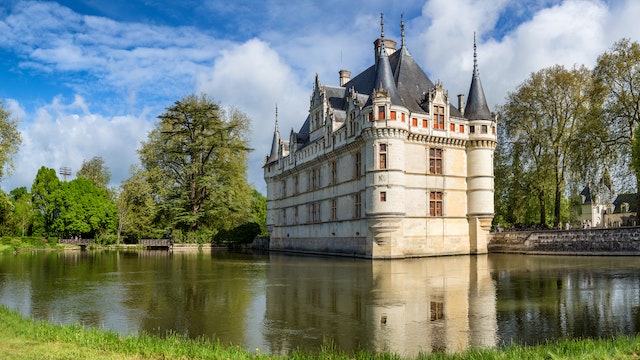 Romantic, moat-ringed Azay-le-Rideau is celebrated for its elegant turrets, perfectly proportioned windows, delicate stonework and steep slate roofs. Built in the early 1500s on a natural island in the middle of the Indre River, it is one of the Loire’s loveliest castles: Honoré de Balzac called it a ‘multifaceted diamond set in the River Indre’. The famous, Italian-style loggia staircase overlooking the central courtyard is decorated with the salamanders and ermines of François I and Queen Claude.

The interior decor is mostly 19th century, created by the Marquis Charles de Biencourt (who bought the château after the Revolution) and his heirs. The Salon de Biencourt was given historically coherent furnishings – plucked from the extensive collection of the French government – and comprehensively restored to its 19th-century glory in 2016. The lovely English-style gardens were restored and partly replanted from 2015 to 2017; the Jardin des Secrets (April to September) features heritage vegetables and flowers.

Audioguides are available in five languages; one-hour guided tours in French are free. In the Pressoir (the outbuilding to the right as you exit the ticket-sales hall), there's a very worthwhile exposition on construction methods and materials, decorative motifs and the restoration of antique furnishings; the videos of experts at work are fascinating.

A number of places to eat are located within a few hundred metres of the château, in the attractive, stone-built village centre.