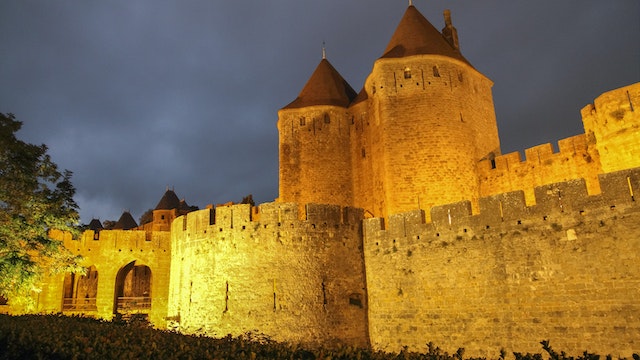 Built on a steep spur of rock, Carcassonne’s rampart-ringed fortress dates back more than two millennia. The fortified town is encircled by two sets of battlements and 52 stone towers, topped by distinctive ‘witch’s hat’ roofs (added by architect Viollet-le-Duc during 19th-century restorations). Note that to actually walk on the ramparts, you have to pay to enter the Château et Remparts.

The hill on which the Cité Médiévale stands has been fortified many times over the centuries – by Gauls, Romans, Visigoths, Moors, Franks and Cathars, to name a few. Following the annexation of Roussillon by France in 1659, the castle’s usefulness as a frontier fortress declined and it slowly crumbled into disrepair. It was saved from destruction by Viollet-le-Duc, who left his mark on many of France’s medieval landmarks, including Notre Dame in Paris and Vézelay in Burgundy.

The castle is laid out in a concentric pattern, with the double wall and defensive towers designed to resist attack from siege engines. A drawbridge can still be seen in the main gate of Porte Narbonnaise, which leads into the citadel’s interior, a maze of cobbled lanes and courtyards, now mostly lined by shops and restaurants. The castle’s second gate, Porte d'Aude, was partly destroyed in 1816 and no longer has its drawbridge.

In between the walls, an interior space known as Les Lices runs for just over 1km around the castle. Though designed as a defensive space to delay would-be attackers, during the medieval era the city’s poorest residents would have built a shanty town of houses and workshops here, which were cleared out during Viollet-le-Duc’s restorations. It’s now the best place to escape the crowds and properly appreciate the castle’s martial architecture.