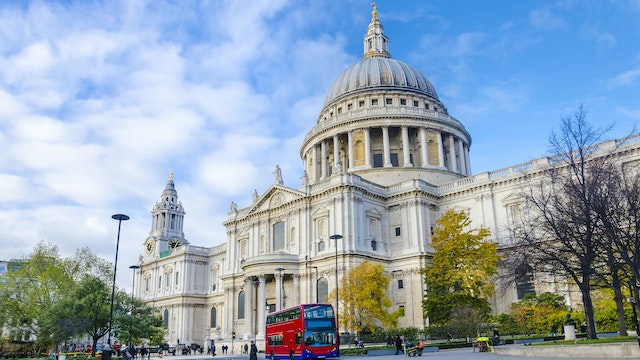 Sir Christopher Wren’s 300-year-old architectural masterpiece is a London icon. Towering over diminutive Ludgate Hill in a superb position that's been a place of Christian worship for more than 1400 years (and pagan before that), St Paul’s Cathedral is one of London’s most magnificent buildings. For Londoners, the vast dome is a symbol of resilience and pride. Seeing this stunning structure from the inside and climbing to the top for sweeping views of the capital is a celestial experience.

Inside, rising more than 85m above the floor, is the dome, supported by eight huge columns. It actually consists of three parts: a plastered brick inner dome, a nonstructural lead outer dome visible on the skyline and a brick cone between them holding it all together. The walkway around its base, accessed via 257 steps from a staircase on the western side of the southern transept, is called the Whispering Gallery. A further 119 steps brings you to the exterior Stone Gallery, your first taste of the city vistas, and 152 iron steps more bring you to the Golden Gallery at the very top, with unforgettable views of London.

The crypt has memorials to around 300 of Britain's great and the good, including the Duke of Wellington and Vice Admiral Horatio Nelson, whose body lies directly below the dome. But the most poignant is to Wren himself. On a simple tomb slab bearing his name, part of a Latin inscription translates as: "If you seek his monument, look around you".

Following the destructive Great Fire of London in 1666, which burned 80% of the city, Wren designed St Paul's to replace the old church, and it was built between 1675 and 1710. The site is ancient hallowed ground, with four other cathedrals preceding Wren's English baroque masterpiece, the first dating from 604 BCE.

The cathedral dome, inspired by St Peter's Basilica in the Vatican, is famed for surviving Luftwaffe incendiary bombs in the "Second Great Fire of London" of December 1940, becoming an icon of London resilience during the Blitz. North of the church is the simple People of London Memorial, honouring the 32,000 civilians killed.

Book tickets online in advance for a slight discount and faster entry. Admission includes access to the cathedral floor, the crypt and the dome galleries, as well as multimedia guides. Free 1½-hour guided tours run daily; reserve a place at the tour desk, just past the entrance. For an additional charge, there are also tours to the geometric staircase, Great Model and library, offering impressive views down the nave from above the Great West Doors. Check at the tour desk for details.

There's no charge to attend a service, but not all areas of the cathedral are accessible. To hear the cathedral choir, attend Sunday Eucharist or Evensong. Check the website in advance for timings and information on visiting choirs.