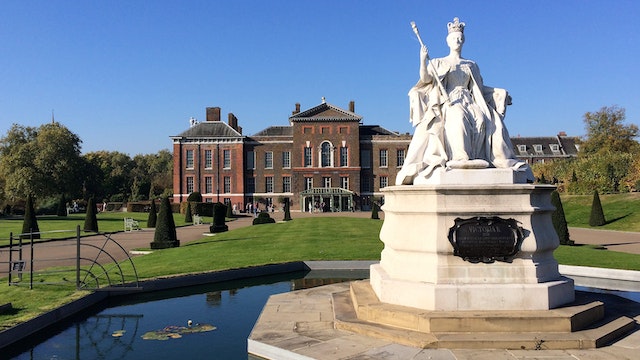 Built in 1605, Kensington Palace became the favourite royal residence under William and Mary of Orange in 1689, and remained so until George III became king and relocated to Buckingham Palace. Today, it remains a residence for high-ranking royals, including the Duke and Duchess of Cambridge (Prince William and his wife Kate). A large part of the palace is open to the public, however, including the King's and Queen's State Apartments.

The King's State Apartments are the most lavish, starting with the King's Staircase, a dizzying feast of trompe l'œil. Next comes the imposing King's Gallery, lined with paintings, followed by the Drawing Room where the king and courtiers would entertain themselves with cards. The beautiful Cupola Room ensues; arranged with gilded statues and a gorgeous painted ceiling, it was once the venue of choice for music and dance.

The Queen's State Apartments are on a smaller scale, but include the Dining Room where William and Mary could enjoy a private meal away from the spotlight of the court, and the rooms in which Mary spent her final hours before dying of smallpox in 1694, leaving a grieving William to reign alone for another eight years.

Visitors can also access Victoria's apartments, where Queen Victoria (r 1837–1901) was born and lived until she became queen. It was here she received the news that her uncle, William IV, had died and that she was now the monarch. An informative narrative about her life is told through a few personal effects, extracts from her journals and plenty of visual props, in an exhibition entitled Victoria: A Royal Childhood.

Outside, take a turn around the charming sunken garden and the 'cradle walk' arbour that surrounds it. This area is also home to the popular Luna Cinema, which puts on screenings of iconic movies in summer and at Christmas.

Palace tickets are cheaper when booked online. Unlimited year-long admission to Kensington Palace, the Tower of London, Hampton Court Palace, Kew Palace and Banqueting House is £52 (see the website for details) and is well worth considering. Also see online for details on activities for kids.