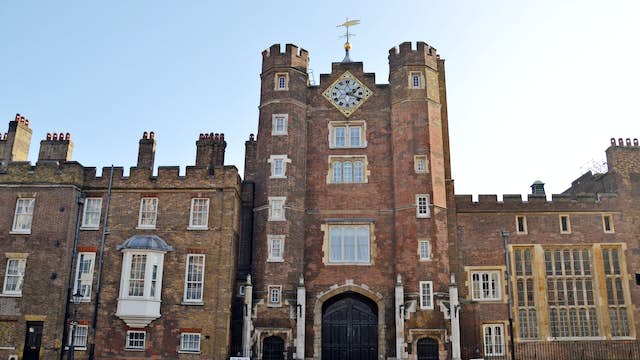 The striking Tudor gatehouse of St James’s Palace is the only surviving part of a building initiated by the palace-mad Henry VIII in 1531 on the grounds of a famous leper hospital. While it's not open to the public, you can admire it from the outside; it's best approached from St James’s St to the north of St James’s Park. The official residence of kings and queens for more than three centuries, St James's is the most senior royal palace in the UK.

Foreign ambassadors are still formally accredited to the Court of St James, although they are actually received at Buckingham Palace. Princess Diana, who hated the place, lived here until her divorce from Charles in 1996, when she moved to Kensington Palace. Prince Charles and his sons stayed on at St James’s until 2004, before decamping next door to Clarence House, leaving St James’s Palace as the London residence of his sister Anne, the Princess Royal, his nieces the Princesses Beatrice and Eugenie and Princess Alexandra.

On the eastern side of the palace, Friary Court is where the Old Guard marches out to be relieved by the New Guard in the forecourt of Buckingham Palace. It is also one of the four places where the death of a monarch is simultaneously announced.