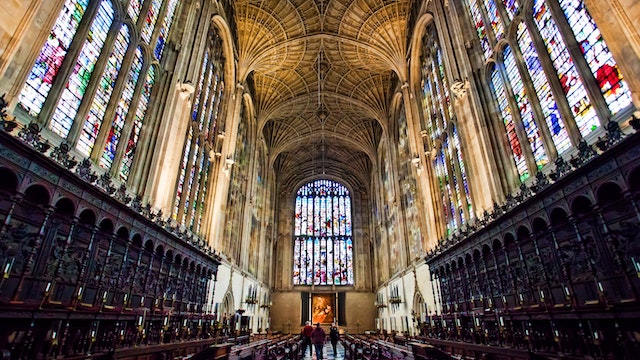 In a city crammed with showstopping buildings, this is a scene-stealer. Grandiose 16th-century King's College Chapel is one of England’s most extraordinary examples of Gothic architecture. Its inspirational, intricate 80m-long fan-vaulted ceiling is the world’s largest and soars upwards before exploding into a series of stone fireworks. This hugely atmospheric space is a fitting stage for the chapel's world-famous choir; hear it sing during the free and magnificent evensong in term time (5.30pm Monday to Saturday; 10.30am and 3.30pm Sunday).

King's steeples have long been a magnet for student night climbers, and today images of the chapel adorn thousands of postcards, tea towels and choral CDs. But it was begun in 1446 as an act of piety by Henry VI and was only finished by Henry VIII around 1516.

The lofty stained-glass windows that flank the chapel’s sides ensure it’s remarkably light. The glass is original, a rare survivor of the excesses of the 17th-century Civil War in this region. It's said that these windows were ordered to be spared by Oliver Cromwell, who knew of their beauty from his own studies in Cambridge.

The antechapel and the choir are divided by a superbly carved wooden screen, designed and executed by Peter Stockton for Henry VIII. The screen bears his master's initials entwined with those of Anne Boleyn. Look closely and you may find an angry human face (possibly Stockton's) amid the elaborate jungle of mythical beasts and symbolic flowers. Above is the magnificent bat-wing organ, originally constructed in 1686, though much altered since.

Beyond the thickly carved dark-wood choir stalls, light suffuses the high altar, which is framed by Rubens' masterpiece Adoration of the Magi (1634) and the magnificent east window. To the left of the altar in the side chapels, an exhibition charts the construction stages and methods.

Note the chapel itself (but not the grounds) is open during the exam period (April to June).

Each Christmas Eve, King’s College Chapel stages the Festival of Nine Lessons & Carols. It’s broadcast globally by the BBC, and to around 300 US radio stations. You can also queue for a place – if you arrive early enough (often by around 9am), you could well get in.