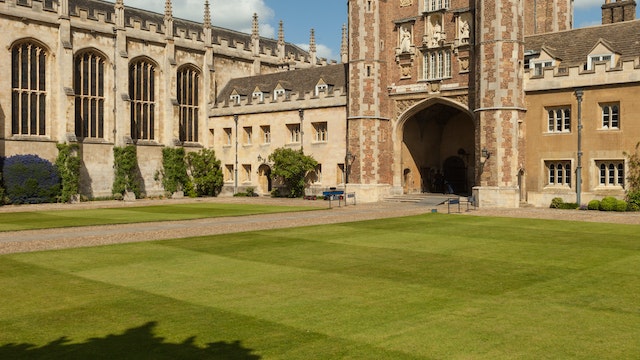 The largest of Cambridge's colleges, Trinity offers an extraordinary Tudor gateway, an air of supreme elegance and a sweeping Great Court – the largest of its kind in the world. It also boasts the renowned and suitably musty Wren Library, containing 55,000 books published before 1820 and more than 2500 manuscripts. Works include those by Shakespeare, St Jerome, Newton and Swift – and AA Milne's original Winnie the Pooh; both Milne and his son, Christopher Robin, were graduates.

As you enter Trinity through the part-gilded gate, have a look at the statue of the college's founder, Henry VIII, that adorns it. His left hand holds a golden orb, while his right grips not the original sceptre but a table leg, put there by student pranksters and never replaced. It's a wonderful introduction to one of Cambridge's most venerable colleges, and a reminder of who really rules the roost.

In the Great Court beyond, scholastic humour gives way to wonderment, thanks to its imposing architecture and sheer size. To the right of the entrance is a small tree, planted in the 1950s and reputed to be a descendant of the apple tree made famous by Trinity alumnus Sir Isaac Newton. Other alumni include Francis Bacon, Lord Byron, Tennyson, HRH Prince Charles (legend has it his bodyguard scored higher in exams than he did), at least nine prime ministers (British and international) and more than 30 Nobel Prize winners.

The college's vast hall has a dramatic hammer-beam roof and lantern; beyond lie the dignified cloisters of Nevile's Court. Henry VIII would have been proud to note, too, that his college would eventually come to throw the best party in town, the lavish May Ball in early June, though you will need a fat purse, and a friend on the inside, to get an invitation.