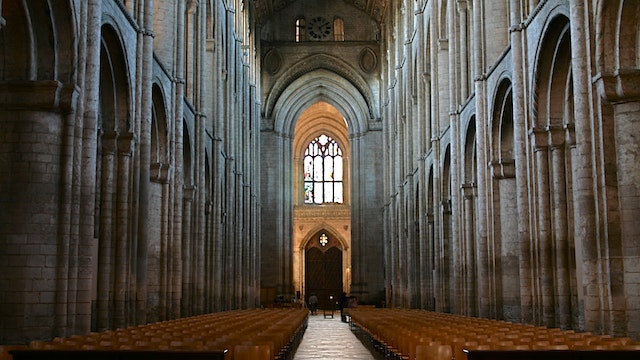 Ely Cathedral’s stunning silhouette dominates the whole area; it’s dubbed the 'Ship of the Fens' because it’s so visible across the vast, flat sweeps of land. The early-12th-century nave dazzles with clean, uncluttered lines and a lofty sense of space. Look out for the entrancing ceiling, the masterly 14th-century Octagon, and towers that soar upwards in shimmering colours. Standard admission includes a ground-floor guided tour. The tower tours (four to five daily) deliver behind-the-scenes glimpses, 165 steps and remarkable views.

Ely has been a place of worship and pilgrimage since at least 673, when Etheldreda, daughter of the king of East Anglia, founded a nunnery here (shrugging off the fact that she had been twice married, in her determination to become a nun). She was canonised shortly after her death. The nunnery was sacked by the Danes, rebuilt as a monastery, demolished and then resurrected as a church after the Norman Conquest. In 1109, Ely became a cathedral. Gothic arches were added later to support the weight of the mighty walls.

The vast 14th-century Lady Chapel is filled with eerily empty niches that once held statues of saints and martyrs. They were hacked out unceremoniously by iconoclasts during the English Civil War. But the delicate tracery remains, overseen by a rather controversial statue of Holy Mary by David Wynne, unveiled in 2000 to mixed reviews. The cathedral's beauty has made it a popular film location: you may recognise some of its fine details from scenes in Elizabeth: The Golden Age and The Other Boleyn Girl. For optimum atmosphere, visit during evensong (5.30pm Monday to Saturday, 4pm Sunday) or a choral service (10.30am Sunday).