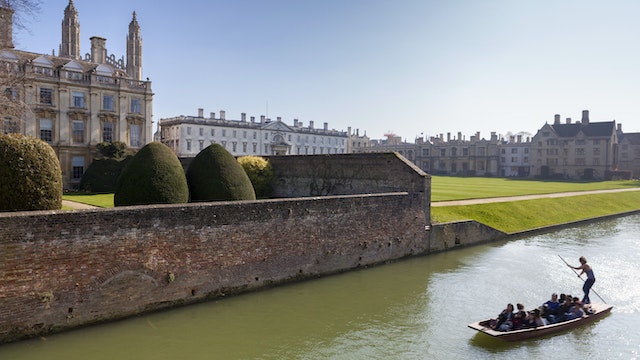 Behind the Cambridge colleges’ grandiose facades and stately courts, a series of gardens and parks line up beside the river. Collectively known as the Backs, the tranquil green spaces and shimmering waters offer unparalleled views of the colleges and are often the most enduring image of Cambridge for visitors. The picture-postcard snapshots of student life and graceful bridges can be seen from the riverside pathways and pedestrian bridges – or the comfort of a chauffeur-driven punt.

For the best views of the fanciful Bridge of Sighs head into St John's College. Built in 1831, it's best observed from the stylish bridge designed by Wren just to the south, also on St John's grounds. The oldest river crossing is at Clare College, built in 1639 and ornamented with decorative balls. Its architect was paid a grand total of 15p for his design and, feeling aggrieved at such a measly fee, it's said he cut a chunk out of one of the balls adorning the balustrade so the bridge would never be complete.

Most curious of all is the flimsy-looking wooden construction (visible from Silver St) that joins the two halves of Queens' College. Known as the Mathematical Bridge, it was first built in 1749. Despite what unscrupulous guides may tell you, it wasn't the handiwork of Sir Isaac Newton (he died in 1727), originally built without nails, or taken apart by academics who then couldn't figure how to put it back together.