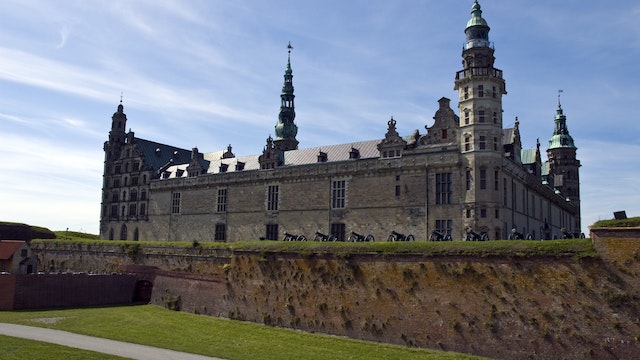 Best known as the Elsinore Castle of Shakespeare's Hamlet, this Unesco World Heritage Site is a vast Renaissance masterpiece topped by baroque green-copper spires. It's ringed by moats, fortifications and powerful Vaubanesque star bastions that you can discover without a ticket. But it's well worth the entry fee to explore the inner palace's rooms, tapestries, ceiling paintings and viewpoints and, best of all, to delve into the spooky maze of casemates – subterranean dungeon passages barely lit by flickering paraffin lamps.

The castle began life as Krogen, a formidable tollhouse built by Danish king Erik of Pomerania in the 1420s to command the 4km Øresund strait between Denmark and today's Sweden. Passing ships heading to or from the Baltic had to pay transit fees, which created enormous tax revenues that made the city very wealthy and allowed Frederik II to vastly expand the castle in 1585. A major fire in 1629 destroyed most of the interior, bar the chapel, but Kronborg came back to life under tireless builder-king Christian IV, who preserved the castle’s earlier Renaissance style while adding his own baroque touches. During the Danish-Swedish wars, the Swedes occupied the castle from 1658 to 1660, looting everything of value, including its then-famous fountain. Thereafter, Christian V bulked up Kronborg’s defences, but the Danish royals gave up trying to make the castle a home. The building was used as a barracks from 1785 until 1924, when it became a museum (the Swedish government sportingly returned some previously looted items).

The site is extensive, and to do it justice you'll need a couple of hours. Around half of that will be spent wandering in areas that are open sunrise to sunset without fee, but for the payable area, note that ticket sales (and entries to the 145-step Cannon Tower) stop half an hour before official closing time. Free wi-fi and several QR-coded information points allow you to download commentaries and a Kronborg visitor app for your mobile phone. From June to August before 5pm there are interactive moments where you might encounter actors playing Hamlet characters. Tickets include optional guided tours, with English versions typically through the day, plus casemates only at 1pm and (possibly) 4pm.

The accessible Royal Apartments section covers two floors of the castle with several huge spaces in which the royal ladies would promenade – going outside was too much for their delicate shoes. See the king's desk, his-and-hers royal bedrooms, and what was, in 1585, the longest ballroom in Scandinavia. Banquets held here consisted of 65 courses, with each guest equipped with their own vomiting bucket. You arrive back into the central courtyard via an extensive gift shop, behind which is an easily missed push-screen historical timeline.

Don't give up yet. Across the courtyard, separate doorways lead to the Cannon Tower (great views, sweaty climb), the well-explained tapestry collection, the 1582 chapel (with original interior fully restored since 1843) and the casemates. Though essentially empty apart from nesting bats and a foreboding statue of Viking chief Holger Danske (Ogier the Dane), this very extensive series of low-ceilinged dungeons, storerooms and soldiers’ quarters stretches a surprisingly long way beneath the castle. It’s suitably dark and creepy, but just follow the dimly lit arrows and you'll emerge…eventually. One extra perk of the paid ticket is the right to walk up to the Flag Bastion for views towards Sweden.