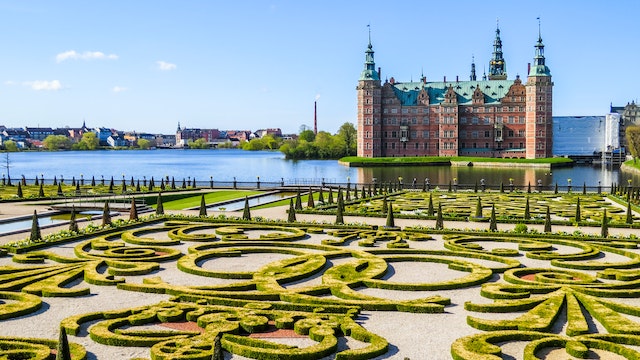 One of Denmark's most impressive buildings, this gigantic, Dutch Renaissance–styled fortress-palace rises proudly out of photogenic moat-lake Slotsø. Access is free to the impressive central courtyards and huge, beautifully tended park with baroque gardens. To visit the interiors (ticket required) you'll need around three hours to do justice to the 80-plus rooms overloaded with beautiful furniture, tapestries, endless portraiture and gilded decor of astonishingly pompous grandiosity. Copious info-cards, along with free audio guides in nine languages, add plentiful context.

The oldest part of the castle dates from the reign of Frederik II, after whom it is named. His son Christian IV was born here, and most of the present structure was built by Christian in the early 17th century.

Especially dazzling is the Slotskirken, where Danish monarchs were crowned between 1671 and 1840. It retains the original interior commissioned by Christian IV, having survived an 1859 fire that ravaged much of the original castle. It's a deliciously ornate confection of curling gold and pink-cheeked cherubs, the altar, font and pulpit crusted with silver detail and overlooked by a priceless 1610 Compenius organ (played on Thursdays for half an hour at 1.30pm).

Also fairly intact is the Audience Chamber, an eye-boggling room containing trompe l’œil details, a self-indulgent portrait of big-nosed Christian V posing as a Roman emperor, and, best of all, a 17th-century elevator chair, which enabled the king to rise regally through the floor!

Other rooms in the castle were restored to their original appearances in the 19th century, notably the richly embellished Riddershalen, a vast ballroom complete with minstrels’ gallery and vivid ceiling carvings.

The rest of the 1st and 2nd floors contain the Museum of National History, a chronologically arranged portrait gallery of kings, noblemen and olden-day celebrities, interspersed with unusual pieces of furniture. It’s a lot to digest in one go – you might be better off concentrating on the time periods that interest you.

North of the castle is an extensive park, Slotshaven. The formal baroque garden (open from 10am till sunset), made up of perfect terraces and immaculately manicured yew and box, demonstrates that even nature was forced to bend to a king’s will. In the Romantic garden, Indelukket, 18th-century rigidity melts into a wilder 19th-century notion of gardening. North again is the oak wood of Lille Dyrehave, which was planted to provide material for boat-building after the Danish fleet was confiscated by England in 1807. You could easily spend a pleasant hour strolling through the three sections, perhaps combining the walk with a ride on the little Frederiksborg ferry.