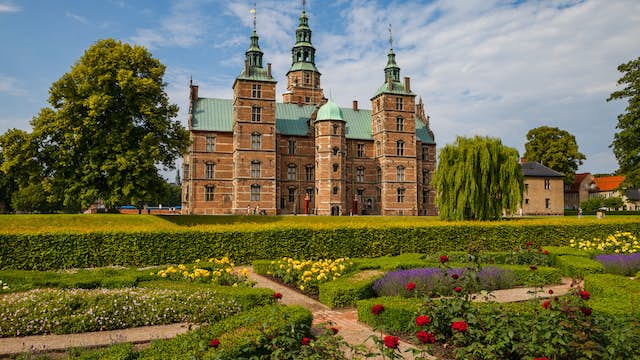 A 'once upon a time' combo of turrets, gables and moat, the early-17th-century Rosenborg Slot was built in Dutch Renaissance style between 1606 and 1633 by King Christian IV to serve as his summer home. Today the castle's 24 upper rooms are chronologically arranged, housing the furnishings and portraits of each monarch from Christian IV to Frederik VII. The pièce de résistance is the basement Treasury, home to the dazzling crown jewels, among them Christian IV's glorious crown and Christian III's jewel-studded sword.

Feeling cramped at Rosenborg, King Frederik IV built a roomier palace in the 18th century in the town of Fredensborg, north of the city. In the years that followed, Rosenborg was used mainly for official functions and as a place in which to safeguard the monarchy's heirlooms. In the 1830s the royal family decided to open the castle to visitors as a museum, while still using it as a treasury for royal regalia and jewels.

To avoid the queues (especially in the summer months), buy your ticket online. The ticket can be sent directly to your smartphone so there's no need to print a copy. Also, buying your ticket online ensures you entry in your desired time slot. If you have a Copenhagen Card, however, you will need to obtain your tickets in person at the castle ticket office.