in Nyhavn & the Royal Quarter 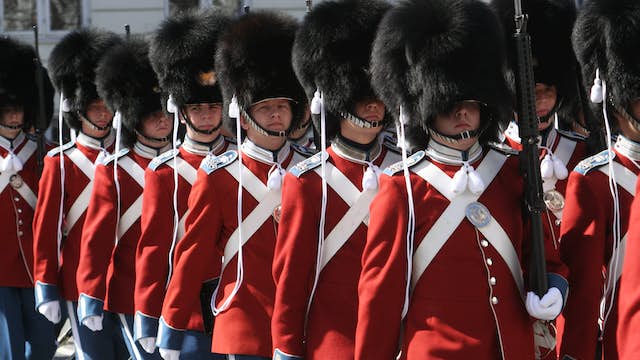 Home of the current queen, Margrethe II, Amalienborg Slot consists of four austere 18th-century palaces around a large cobbled square. The changing of the guard takes place here daily at noon, the new guard having marched through the city centre from the barracks on Gothersgade at 11.30am.

One of the palaces features exhibits of the royal apartments used by three generations of the monarchy from 1863 to 1947, its reconstructed rooms decorated with gilt-leather tapestries, trompe l'oeil paintings, family photographs and antiques. They include the study and drawing room of Christian IX (1863–1906) and Queen Louise, whose six children wedded into nearly as many royal families – one ascending to the throne in Greece and another marrying Russian Tsar Alexander III. The grand, neoclassical Gala Hall houses statues of Euterpe and Terpsichore created by a young Bertel Thorvaldsen.