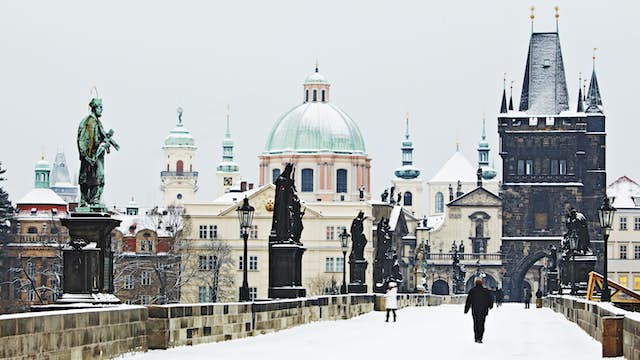 Strolling across Charles Bridge is everybody’s favourite Prague activity. However, by 9am it’s a 500m-long fairground, with an army of tourists squeezing through a gauntlet of hawkers and buskers beneath the impassive gaze of the baroque statues that line the parapets. If you want to experience the bridge at its most atmospheric, try to visit it at dawn.

In 1357 Charles IV commissioned Peter Parler (the architect of St Vitus Cathedral) to replace the 12th-century Judith Bridge, which had been washed away by floods in 1342 – you can see the only surviving arch of the Judith Bridge by taking a boat trip with Prague Venice.

The new bridge was completed in 1390, and took Charles’ name only in the 19th century – before that it was known simply as Kamenný most (Stone Bridge). Despite occasional flood damage, it withstood wheeled traffic for 500-odd years – thanks, legend says, to eggs mixed into the mortar (though recent investigations have disproved this myth) – until it was made pedestrian-only after WWII.

The first monument erected on the bridge was the crucifix near the eastern end, in 1657. The first statue – the Jesuits’ 1683 tribute to St John of Nepomuk – inspired other Catholic orders, and over the next 30 years a score more went up, like ecclesiastical billboards. New ones were added in the mid-19th century, and one (plus replacements for some lost to floods) in the 20th. As most of the statues were carved from soft sandstone, several weathered originals have been replaced with copies. Some originals are housed in the Casements at Vyšehrad; others are in the Lapidárium in Holešovice.

The most famous figure is the monument to St John of Nepomuk. According to the legend on the base of the statue, Wenceslas IV had him trussed up in armour and thrown off the bridge in 1393 for refusing to divulge the queen’s confessions (he was her priest), though the real reason had to do with the bitter conflict between church and state. The stars in his halo allegedly followed his corpse down the river. Tradition says that if you rub the bronze plaque, you will one day return to Prague. A bronze cross set in the parapet between statues 17 and 19 marks the point where he was thrown off.

At the Staré Město end of the bridge, look over the downstream parapet at the retaining wall on the right and you’ll see a carved stone head known as Bradáč (Bearded Man). When the river level rose above this medieval marker, Praguers knew it was time to head for the hills. A blue line on the modern flood gauge nearby shows the level of the 2002 flood, no less than 2m above Bradáč!

In the crush, don’t forget to look at the bridge itself (the bridge towers have great views) and the grand vistas up and down the river. Pickpockets occasionally work the bridge, so keep your purse or wallet safe.