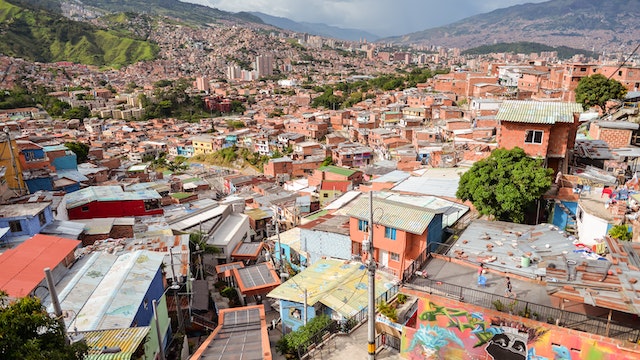 Once one of the most dangerous neighborhoods in Medellín, the Comuna 13, which clings to the mountainside above the San Javier metro station, has undergone an impressive transformation in recent times and is now considered safe to visit. The focal point of a trip to the comuna is the area around the escaleras electricas, the outdoor escalators that provide access to homes in marginalized barrios that were formerly isolated from the city below. A taxi from the metro costs COP$5500.

Alongside the Metrocable lines, the escaleras electricas are one of the icons of the rebirth of Medellín. The area surrounding the six sets of escalators is awash with murals and graffiti, while at the top there is a lookout and a boardwalk offering fine views of the bustling city below.

In order to fully understand the violence and difficulties that have plagued the area and its impressive reformation, it's a great idea to hike the comuna with a local guide. Recommended guides can be arranged at Casa Kolacho near the San Javier metro. Alternatively, check out the barrio's artwork with the Comuna 13 Graffiti Tour, departing twice daily from the Poblado metro.

To reach the escaleras take either bus 221i or 225i from the stop by the traffic lights on the right as you leave the San Javier metro. Buy an integrated ticket at the station where you board the metro.