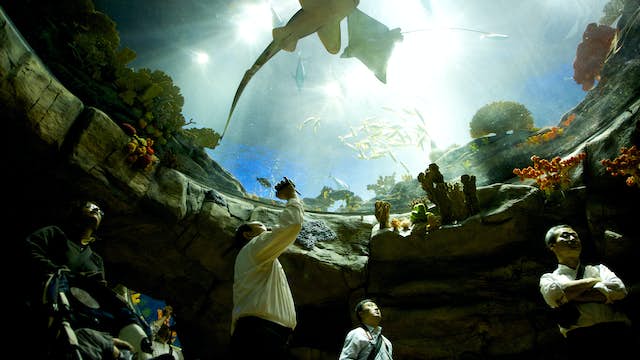 Despite the crowd-pulling powers of Disneyland on Lantau, Ocean Park remains the most popular theme park in Hong Kong. Constant expansion, new rides and thrills, and the presence of four giant pandas and two rare red pandas ensure the park remains a huge draw for families. Be aware that in part of the park, Marine World, cetaceans are kept in captivity and performances involving dolphins and orcas are a feature, which scientific studies suggest is harmful to these animals. Ocean Park is undergoing a mega expansion that will see the launch of the 3716-sq-metre Tai Shue Wan Water World in 2019/20.

The park is divided into two main sections. The main entrance is on the Waterfront (lowland) side and is linked to the main section on the Summit (headland) via a scenic cable car ride and a marine-themed funicular train called the Ocean Express.

The major attractions at the Waterfront are Amazing Asian Animals and Aqua City. The Grand Aquarium, which boasts the world’s largest aquarium dome, is home to 5000 fish representing over 400 species. Old Hong Kong is a replica of the old buildings that once graced Wan Chai and older parts of Kowloon. To the north is Whiskers Harbour, which thrives on an assortment of kid-oriented rides.

On the Summit, Thrill Mountain has plenty of white-knuckle rides, such as the celebrated roller coaster, Hair Raiser. Meanwhile, the Chinese Sturgeon Aquarium showcases a living gift from the mainland.