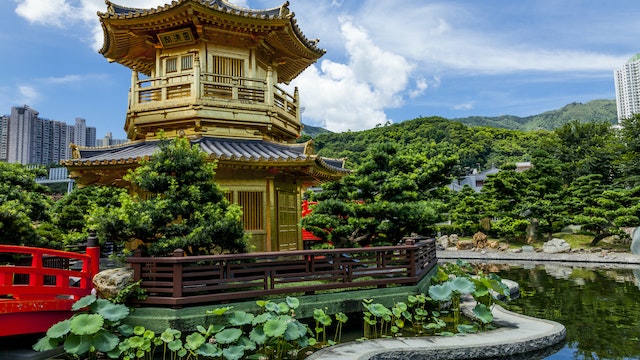 One of Hong Kong's most arresting and tranquil escapes, this Buddhist complex, originally dating from the 1930s, was rebuilt completely of wood (and not a single nail) in the style of the Tang dynasty in 1998. Amid lotus ponds, immaculate bonsai tea plants and bougainvillea, silent nuns deliver offerings of fruit and rice to Buddha and arhats (Buddhist disciples freed from the cycle of birth and death), or chant behind intricately carved screens.

The architecture (interlocking sections of wood joined without a single nail) is intended to demonstrate the harmony of humans with nature. It’s pretty convincing – until you see the high-rises looming behind the complex.

You enter the complex through the Sam Mun, a series of ‘three gates’ representing the Buddhist precepts of compassion, wisdom and ‘skilful means’. The first courtyard, which contains the delightful Lotus Pond Garden, gives way to the Hall of Celestial Kings, with a large statue of the seated Buddha surrounded by the deities of the four cardinal points. Behind that is the main hall, containing a statue of the Sakyamuni Buddha flanked by two standing disciples and two seated Bodhisattvas.

To reach the nunnery, take exit C2 of Diamond Hill MTR station, turning right at the top of the escalator (don't enter the mall). It's a five-minute walk east along Fung Tak Rd.