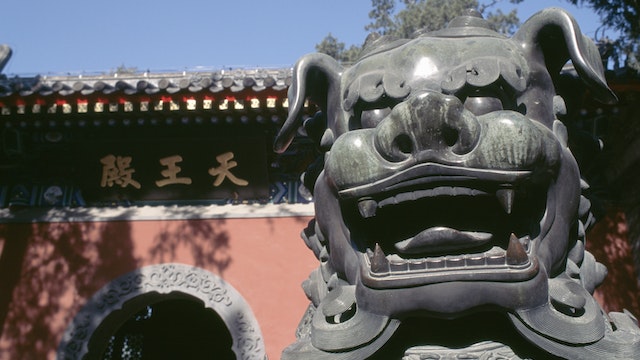 Infused with an air of sleepy reverence, this working Buddhist temple is one of Beijing's most evocative. Perhaps it's the ancient Song dynasty pines, interspersed with thickets of lilacs, gingkos and crabapple trees from the time of Emperor Qianlong, or the way monks and local retirees outnumber tourists, but bustling Beijing feels aeons away. Originally built in the 7th century to honour soldiers killed in battle with Korean tribes, the current halls are 20th-century renovations.

That being said, the courtyards contain several ancient stelae and the halls dozens of handsome Buddhist relics in glass cases. Beijing's longest reclining Buddha at 7.4m lies supine in the rearmost hall (closed for renovations at time of research). And do seek out the Pilu Hall for its enormous stone lotus bulb engraved with '1000 leaves' of Buddha images and crowned with the Five Dhyani Buddhas.

You can be certain of seeing monks here, because Dayuan Temple also serves as as a Buddhist teaching academy, well furnished with precious religious texts stored within the Pavilion of Buddhist Sutras.