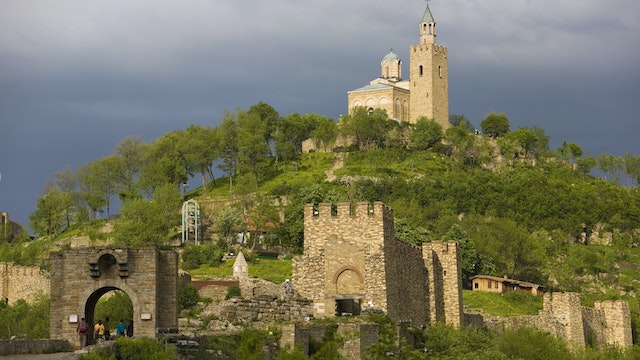 The inescapable symbol of Veliko Târnovo, this reconstructed fortress dominates the skyline and is one of Bulgaria’s most beloved monuments. The former seat of the medieval tsars, it hosts the remains of more than 400 houses, 18 churches, the royal palace, an execution rock and more. Watch your step: there are lots of potholes, broken steps and unfenced drops. The fortress morphs into a psychedelic spectacle with a magnificent night-time Sound & Light Show.

Tsarevets Museum-Reserve is located on Tsarevets Hill, which has been settled since time immemorial due to its strategic location. Thracians and Romans used it as a defensive position, but the Byzantines built the first significant fortress here between the 5th and 7th centuries AD. The fortress was rebuilt and fortified by the Slavs and Bulgars between the 8th and 10th centuries, and again by the Byzantines in the early 12th century. When Târnovgrad became the Second Bulgarian Empire’s capital, the fortress was truly magnificent, but it was sacked and destroyed with the Turkish invasion in 1393. Tourists can thank the communists for returning it to a semblance of its former glory (although some archaeologists grumble about the faithfulness of the restoration).

Entering the structure, pass through two gates and veer left (northeast) for the fortress walls – some were once 12m high and 10m thick. Further along the walls are the unrecognisable remains of a 12th-century monastery, various dwellings and workshops and two churches. To the north lie remains of a 13th-century monastery, and Execution Rock, from which traitors were pushed into the Yantra River. Alleged traitor Patriarch Joachim III was the most famous figure to take the plunge, in 1300.

The complex’s eastern path is less remarkable; return to the middle, using the hilltop Patriarch’s Complex as a landmark. Past one of several modern bells (used in the Sound and Light show) are a ruined nobleman’s dwelling and two churches to the left (east).

Below the Patriarch’s Complex are the foundations of the Royal Palace, from where 22 successive kings ruled Bulgaria. Once covering 4500 sq metres, the palace included an appropriately enormous throne (measuring about 30m by 10m) and Roman columns, probably transferred from nearby Nikopolis-ad-Istrum.

From the palace, head west to the main path and up the steps to the Patriarch’s Complex, also called the Church of the Blessed Saviour. Once about 3000 sq metres in size, it was probably built around 1235 and has been extensively restored. The city views from the front steps are more impressive than the modern murals inside, depicting 14th- and 15th-century Bulgarian history.

Returning towards the main entrance, veer left along the path hugging the southern wall. At its end is the restored Baldwin Tower, where Baldwin I of Flanders – the perfidious Crusader who led the sacking of Christian Byzantium in 1204 – got his just deserts, imprisoned and executed after his defeat by the Bulgarians a year later. There are great views from the top.