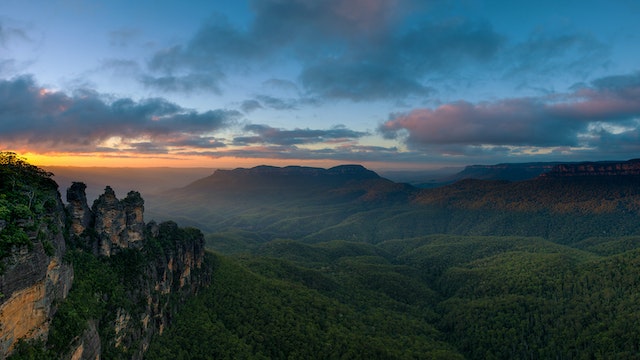 The Blue Mountains' essential sight is a rocky trio called the Three Sisters. Just an hour outside of Sydney, they stand at over 2953ft (900m) and a 1640ft (500m) trail from the main Echo Point lookout platform leads to more lookouts and a bridge across to the first Sister. They were formed over 200 million years ago when volcanic lava pushed through sedimentary rock and transformed it into stone towers. However, the local legend of their formation is much more intriguing.

Legend of the Three Sisters

According to Aboriginal legend the sisters, Meehni, Wimlah and Gunnedoo, were members of the Katoomba tribe and lived in the Jamison Valley. All three sisters fell in love with three brothers from a neighboring tribe and wanted to marry them...something that was strictly forbidden by tribal law. The brothers were so determined to wed their beloveds that they started a war with the other tribe to overturn the ban on intermarriage. Fighting became so intense that a witch doctor in the sisters' tribe turned them to stone in order to protect them from the violence. His plan to turn them back into women when it was safe was thwarted when he himself was killed in battle. The sisters stayed immortalized in stone forever, never to be reunited with their lost loves.