More than meatballs: a gourmet guide to Swedish cuisine

Having a muppet as your main culinary ambassador is a lot to overcome, especially for a smallish, out-of-the-way country like Sweden, whose presence in global pop-culture is fairly limited. Swedish food is and forever will be associated with meatballs, flying utensils and the phrase 'bork bork bork'. Not that there’s anything wrong with that – meatballs are a well-loved staple, an important part of the tradition of Swedish home cooking known as husmanskost. But there’s much more than Swedish meatballs for the visiting gourmand to sample.

Historically in Sweden, the growing season was short and harsh weather conditions made it difficult to transport produce for much of the year. Sweden is sparsely populated and, from tip to tail, makes for quite a trek through the wilderness, particularly in winter. So the country’s eating and cooking habits developed around a reverence for hyper-local, seasonal ingredients and interesting methods of preservation.

For example, each province makes its own trademark variety of cheese (Västerbotten’s is a favourite – you can usually find wedges of it at IKEA). Regions tend to build their go-to menu items around ingredients that are readily available from local farms and forests. Anything that needs to be shipped or stored is cured, dried, pickled or canned. 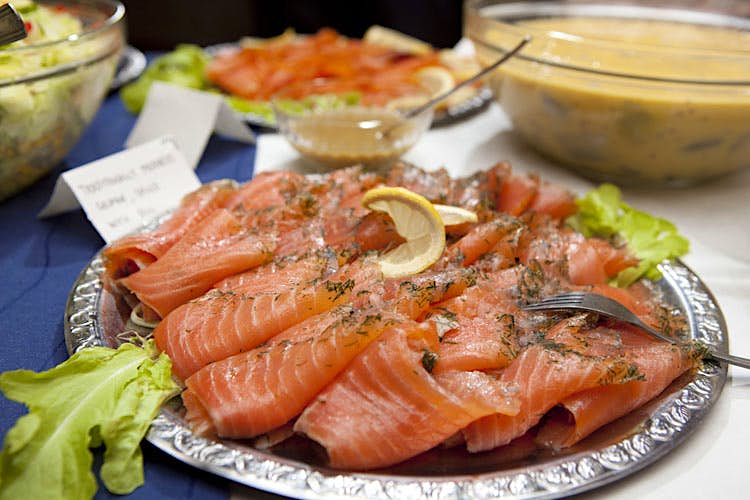 The need to preserve short-lived delicacies has led over the years to such ubiquitous Swedish favorites as gravad lax (thin slices of cured salmon), pickled herring, filmjölk (fermented milk, a bit like buttermilk), lingonberry jam and various liqueurs. It has also created a national obsession with seasonal foods like cloudberries, chanterelle mushrooms and crayfish. Swedes have a stark appreciation for the fleetingness of seasons – they come and go quickly here, especially in the far north, and their bounty must be seized and enjoyed while it can. Of course, these days it’s possible to buy strawberries all winter, or boil crayfish any time you like – but this misses the point. Generally speaking, Swedish cuisine holds to a certain order. 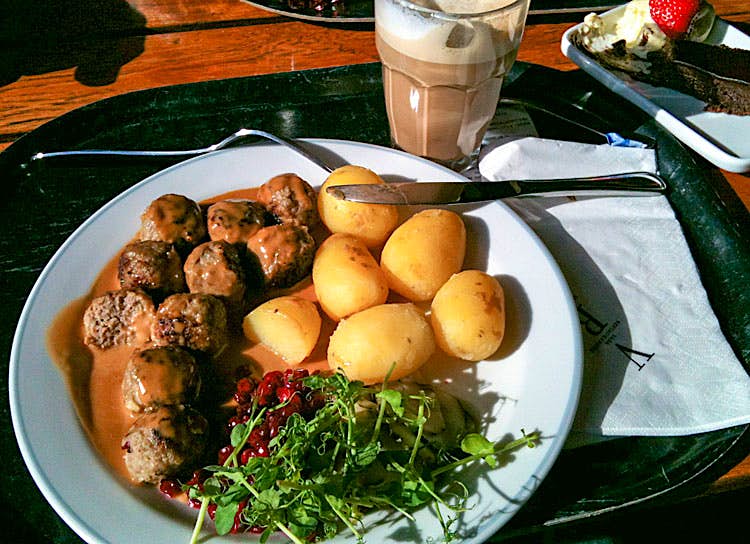 With all that in mind, here are some basics of husmanskost, most of which any visitor to Sweden will encounter:

Meatballs: strictly speaking, traditional Swedish meatballs are made with specific proportions of ground beef, pork and veal, and are served with gravy, lingonberries and boiled or mashed new potatoes.

Herring: you’ll find this little fish pickled, fried, mushed into salads or rolled up into flatbread wraps, with any of a number of regionally specific sauces. In Swedish it’s called either called sil or strömming, depending on which coast it comes from. Something to note but not necessarily try yourself is surströmming – canned fermented herring, an annual sensory nightmare you’ll be able to smell from miles away. In a similar category is lutfisk, a holiday 'treat' consisting of dried cod preserved in lye (yes, lye, the caustic chemical normally used in soapmaking) and reconstituted to form a pale, gelatinous mass eaten with butter or bechamel sauce and green peas. Mmm!

Reindeer: this might sound a little strange until you go to Northern Sweden and realize that reindeer here are just ordinary livestock. Reindeer meat forms the core of the cuisine of the Sami, Northern Scandinavia’s native people. It’s prepared in every imaginable way, from dried to cured to pickled to smoked to roasted, often with seasonal berry-based sauces. Unlike lutfisk or surströmming, it requires neither practice nor a stubborn nature to enjoy; if you see it on a menu, give it a try. 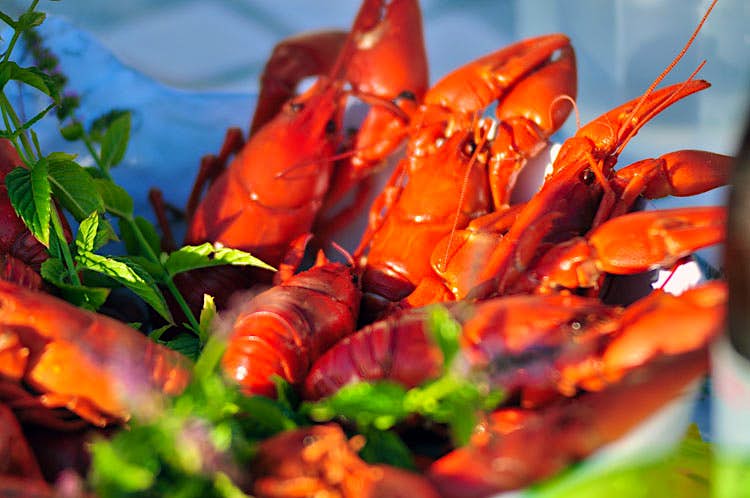 Platter of crayfish and mint. Image by Zdenko Zivkovic / CC BY 2.0.

Thinking outside the Smorgasbord: twists on the classics

Stockholm’s superstar chef Mathias Dahlgren was among the first to experiment with mixing standard Swedish cooking and ingredients with imported, adventurous techniques. These days, there is a well-established 'New Nordic' culinary school, with endless variations.

One way to look at the New Nordic cuisine is as an extreme interpretation of the concept of regional cooking: chefs are not simply making use of the usual local ingredients, but also incorporating actual pieces of the landscape. At top-end restaurants both in Sweden and abroad, chefs are using traditional, locally sourced ingredients in ways that may seem a little wacky but can, in fact, be traced back to the landscape of origin: things like arctic char served on tufts of hay, with some sort of seafoam on top, attractively plated on rocks, shells or tree branches. It's an element of Swedish cooking that has spread far and wide, and hints at the country’s special brand of absurdist humour. 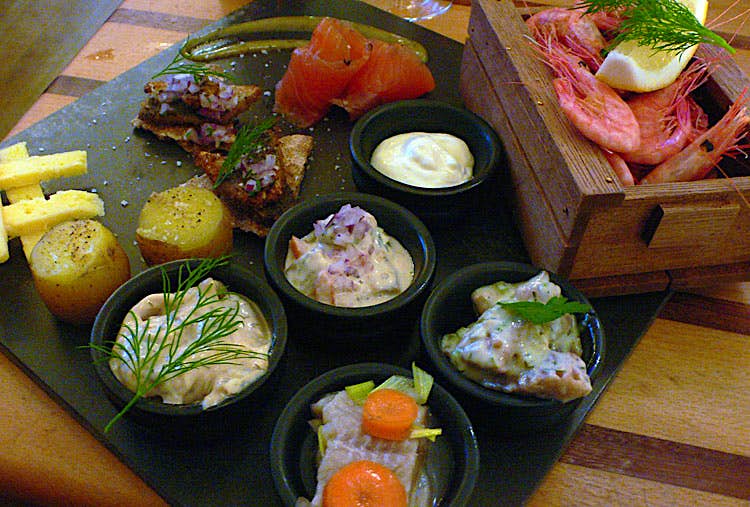 Given the degree to which Swedish cuisine depends on landscape, it's no surprise that the changing cultural landscape has also had an impact. EU membership dramatically opened up trade and immigration in the previously isolated country, resulting in a more mixed population and a welcome influx of new flavours. Almost 1 million of Sweden’s 9 million inhabitants are first- or second-generation immigrants. Many of these groups bring their own cuisines with them. For instance, kebab shops are now entirely ordinary all over Sweden, even in smaller towns; they’re a rare, reliable example of affordable dining. There are dozens of Thai, Japanese, Italian, Turkish and Indian restaurants, which certainly wasn’t the case 15 or 20 years ago. And the wider availability of imported ingredients in grocery stores means Swedes are cooking more adventurously at home, expanding the national palate even further.

Fascinating new culinary fusions are on the horizon for Sweden, so expect to hear about much more than meatballs in future. 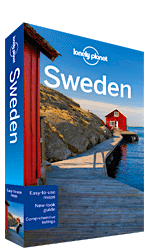 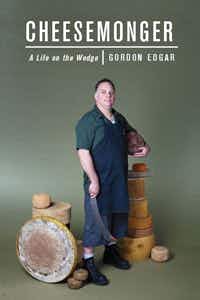 Cheese travel: tips from a cheesemonger 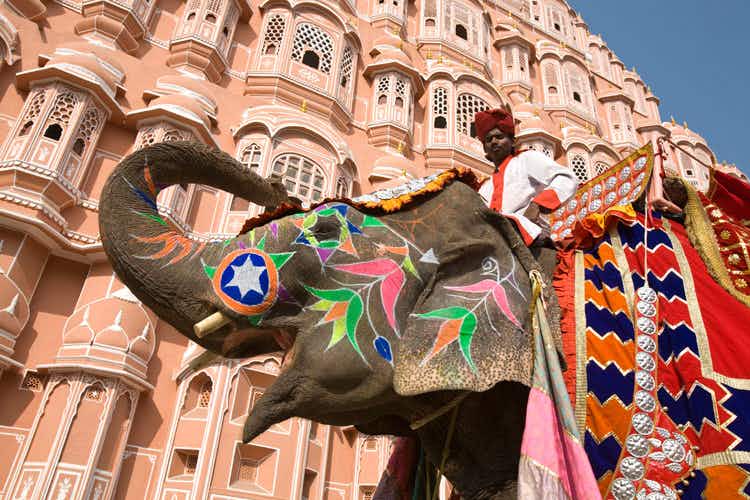 What are your travel resolutions for 2014?