Are you packing your bags for Europe this summer, or still just fantasizing about it? Either way, you’ll be spoiled for choice when you cast your eyes over our irresistible expert picks.

While our Best in Travel 2014 already touted Paris’ urban renaissance, Scotland’s many events, and Yorkshire’s charms along with other countries, cities and regions all over the globe, our team of Europe-based editors wanted to delve deeper and curate a list of 10 places in Europe that should be on travelers’ radars this year. Whether gathering buzz right now, overlooked in years past, or perennial favorites with a fresh face, these are our picks for the Best in Europe for 2014. 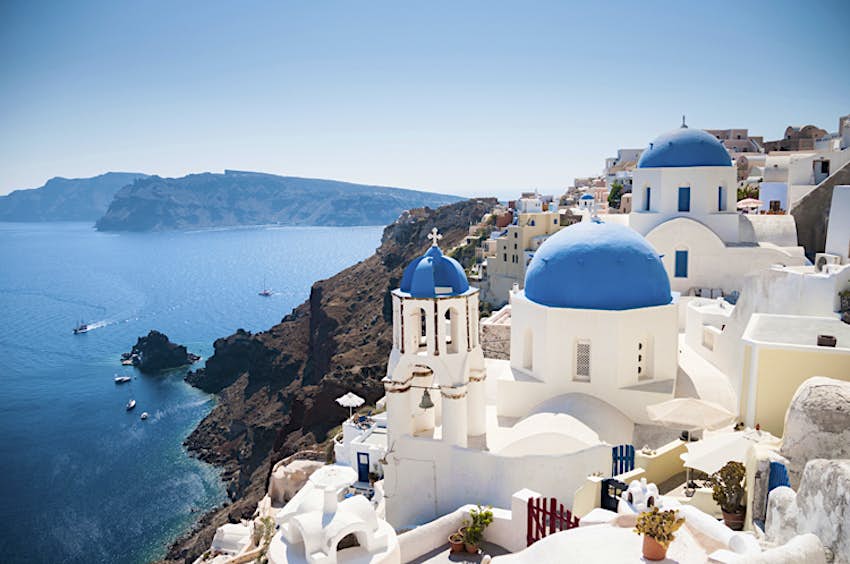 Exceptional experiences, like this one in Santorini, Greece, may not cost what you'd think. Image by Li Kim Goh/ E+/ Getty Images.

Think that dream trip to Greece is out of your budget range? Think again. Greece tops our list this year as experiencing the country’s sunburnt islands and ancient culture is far more affordable than many expect. Greece’s ongoing financial crisis has caused visitor numbers to decrease and, as a result, prices have dropped in an effort to woo back travelers. In fact Santorini was added to the European Backpacker Index for 2014 (news.gtp.gr). And if you’re after a tipple with your moussaka, bonus: Wine Enthusiast magazine voted the Aegean Islands one of the best wine travel destinations for 2014 (winemag.com). Also, with tourism still playing catch-up, you’ll experience smaller crowds and emptier beaches. Tip: if you patronize independent businesses and outfitters, your dollars will be funneled back into the local economy.

Our resident author reveals tips on stretching your euros in Greece. 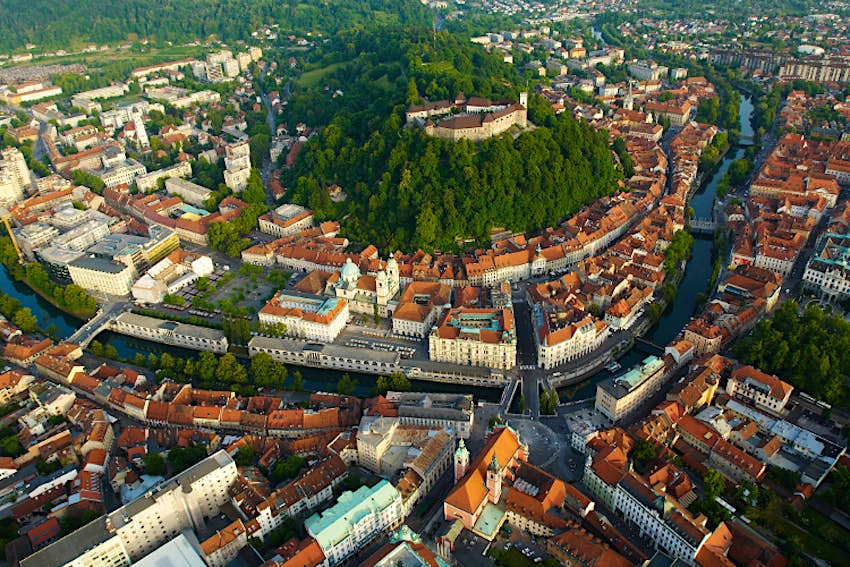 The castle and Old Town of Ljubljana, as seen from the air. Image by Tomo Jeseničnik /

Ljubljana might not roll off the tongue for many travelers but it’s worth learning how to pronounce as you’re bound to hear much more about Slovenia’s capital in the years ahead. Ljubljana is already one of Europe’s greenest and most livable cities, boasting a friendly cafe culture by day, and vibrant nightlife after the sun sets. This year gives Ljubljana even more reasons to preen, as the city celebrates the 2000th anniversary of the Roman colony Emona on the same site as the modern-day city. Quirky Roman-themed events and exhibitions will take place throughout the year, and the showpiece event 'Ave, Emona!' (22-24 Aug) will transport the city’s central Kongresni trg (Congress Square) back in time (slovenia.info). Ready your sword for those gladiator fights (or watch from a safe distance). Plus it makes the perfect base with plentiful, inexpensive buses radiating out of the city to the rest of Slovenia, which is as picture-perfect as Switzerland but much easier on the wallet.

We have plenty of Ljubljana recommendations and insights from our Lonely Planet Slovenia author. 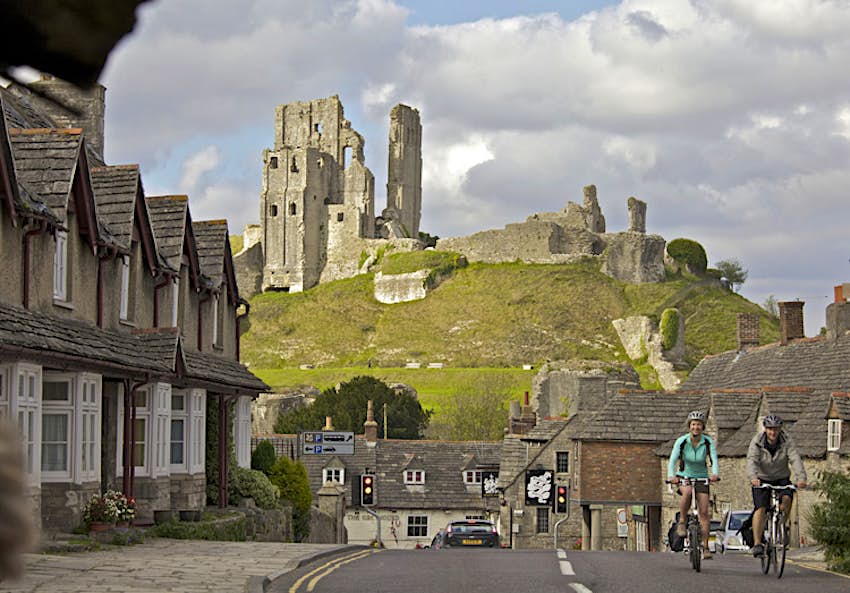 Corfe Castle: Does it get any more romantic than cycling through an English coastal town with a castle in the background? Image courtesy of VisitEngland/Weymouth and Portland Borough Council/Cycle West- Tim Pestridge.

Imagine yourself motoring through the romantic English countryside, stopping in charming villages, gawping at castles, and staying in the quaintest guesthouses and B&Bs this side of Downton Abbey. You’re in Southwest England, where dramatic rural landscapes yield to breathtaking coastal scenery and even reputable surf breaks. Southwest England is a popular holiday getaway for in-the-know Brits so go now before the rest of the world catches on. Picture-perfect Cornwall and Devon provide key stopping points along the South West Coast Path, a walking trail which wiggles for over 1100 spectacular, calf-cramping kilometers. This region is producing some of the UK’s most innovative cuisine as well: locally sourced, ethically produced, organic and prepared by fantastic home-grown talent. No wonder it's already blessed with a handful of Michelin stars. Paul Ainsworth, Jude Kereama, Nathan Outlaw and Rick Stein are just a few names to look out for.

Our food expert gives you the lowdown on Southwest England’s gourmet adventures. 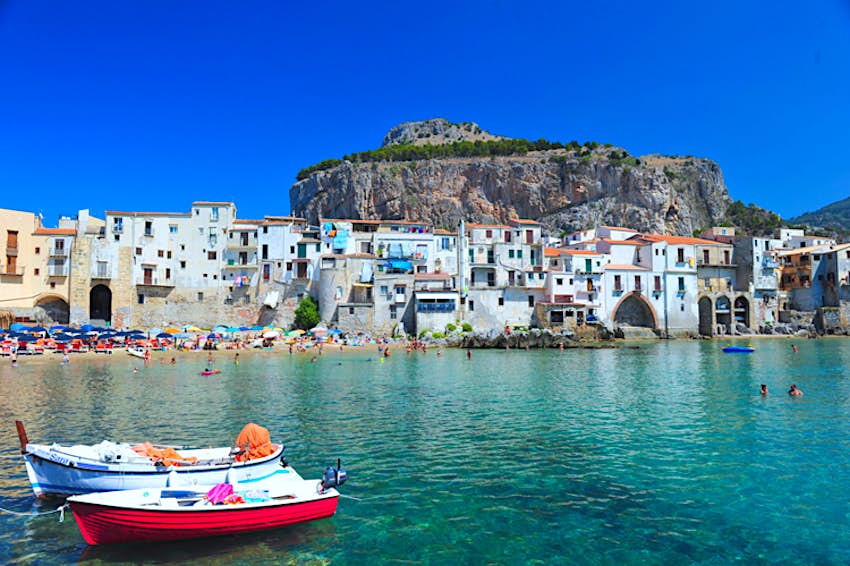 Must-have experiences abound in this nation saturated with history, culture, art, architecture, food, and natural beauty. Italy’s show-stopping cities include Rome, Venice, and Florence, yet every region of this revered travel destination is guaranteed to provide an unforgettable vacation. Italy made the list this year as it’s lesser-known, lesser-visited (and perhaps less expensive) areas offer even the most seasoned bel paese (beautiful country) visitors new, authentic and unexpected experiences. Sip prosecco in the Veneto countryside, revel in Umbria’s preternatural beauty, be a beach bum in Puglia, escape the mainland on Sardinia or soak up the cultural complexity of Sicily. Whatever you do, prepare to be dazzled.

In celebration of Italy being on the Best in Europe 2014 list, Lonely Planet has unlocked the full version of its Italian Fast Talk app for free until June 30th, 2013. 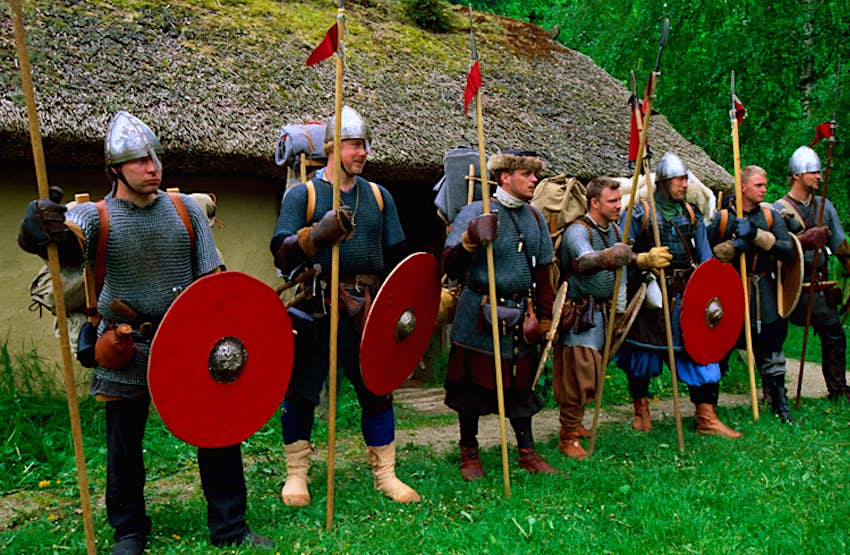 If you time your trip to Denmark right, you could watch a real, live Viking moot. Image by John Elk/ Lonely Planet Images/ Getty Images.

What comes to mind when you think of Denmark? Vikings naturally! Instead of learning about them through the History Channel (history.com) or British Museum (britishmuseum.org), head to Denmark where burial sites, rune stones, settlements and museums bring these ancient people to life. Spy some Viking artifacts in Copenhagen’s National Museum before heading to Roskilde to learn more about Viking voyages and seafaring craft. Viking history continues on the island of Funen, birthplace of Hans Christian Andersen, and across the Jutland peninsula: check out the Viking Moot (moesmus.dk), where 800 costumed folks gather and geek out, or settle in Ribe, Denmark’s oldest town (founded around 700 as a Viking marketplace), recently voted ‘Europe’s Best Big-Time Small Destination’ (hotel.info).

Here is our itinerary to follow in the footsteps of the Vikings in Denmark. 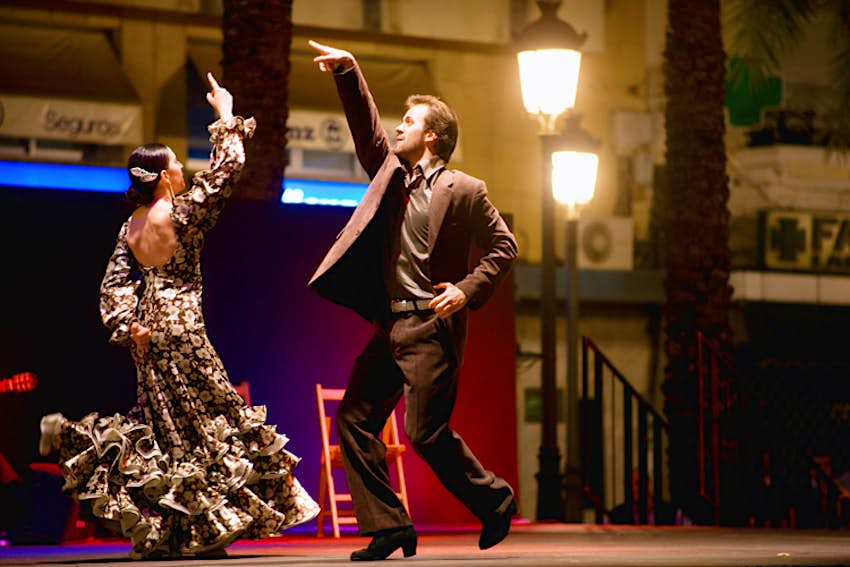 Seville is the vivacious capital of Spain’s fascinating Andalucía region, and a brilliant alternative to pricier and more touristed Madrid and Barcelona. The laid-back pace, authentic flamenco shows and the region’s best tapas bars are merely a few reasons why Seville entices visitors to simply enjoy themselves. And that they do – being out at night among the city’s relaxed, heady crowds is unforgettable, no matter how much sangria you drink. While Seville has the country’s most passionate and portentous Semana Santa (Holy Week), prices soar; consider September or October this year as a prime time to visit.

Can’t choose a casa? Here’s our collection of the best places to stay in Seville. 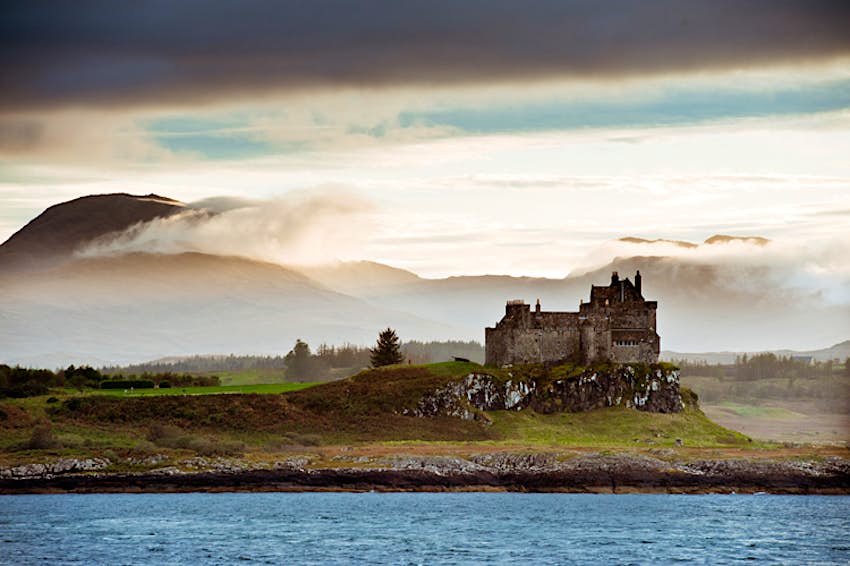 With scenery like this--Duart Castle on the Isle of Mull-- we certainly don't have to convince you to visit. Image by Gregory Heath/ Moment/ Getty Images.

The Isle of Skye is one of Scotland’s most touristed destinations but we think the Outer Hebrides, the 119 islands lying further off Scotland’s northwest coast, deserve more love. Curious visitors will discover natural beauty in wildflower-speckled machair (grassy sand dunes) and dazzling sugar-white beaches, majesty in rugged hills and sprawling lochs, and mystery in the islands’ fascinating past. The pace of life is nice and slow, which offers ample time to savor the islands’ increasing foodie/craft beer/booze offerings after a long day of exploration and adventure. Cycling is an idea way to sightsee the prehistoric sites, ancient castles, old island blackhouses (traditional cottages) and arts and crafts studios.

Read about our Scotland author’s choices of what to do in the Hebrides. 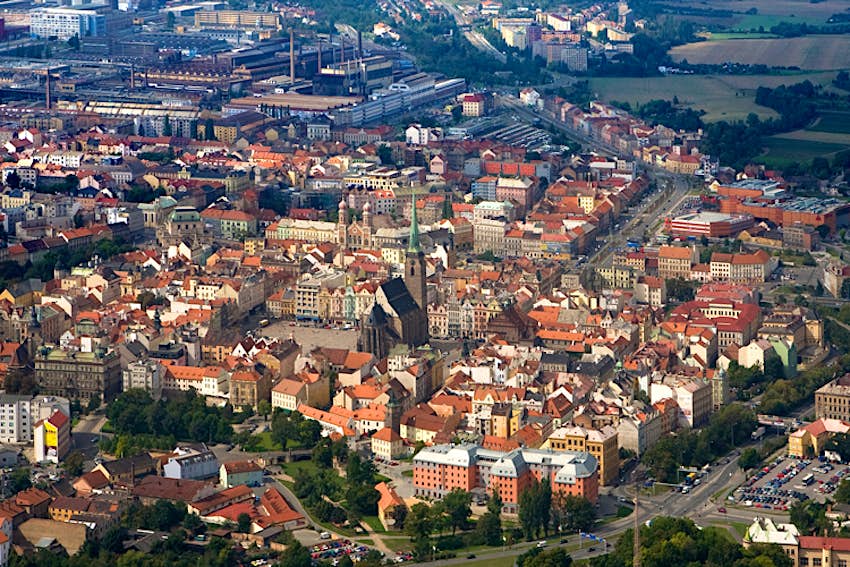 An aerial view of Plzeň, Capital of Culture, but more importantly, birthplace of beer. Image courtesy of visitpilsen.eu.

Thirsty for a day of culture washed down with a refreshing pint? Plzeň is serving up both in spades, which may be why it was chosen as the European Capital of Culture for 2015 (alongside Mons, Belgium). Merely a 90-minute trip from Prague, but far less crowded, Plzeň is the birthplace of the beloved pilsner as we know it today. Of course no visit is complete without a tour of the Pilsner Urquell Brewery, and you can work off some of the requisite post-tour beers by exploring the underground tunnels of the city, climbing to the top of Gothic church St Bartholomew’s spire, and strolling in and around Republic Square, one of the nation’s largest public spaces.

Get the best travel tips on Plzeň from our Czech Republic–based author. 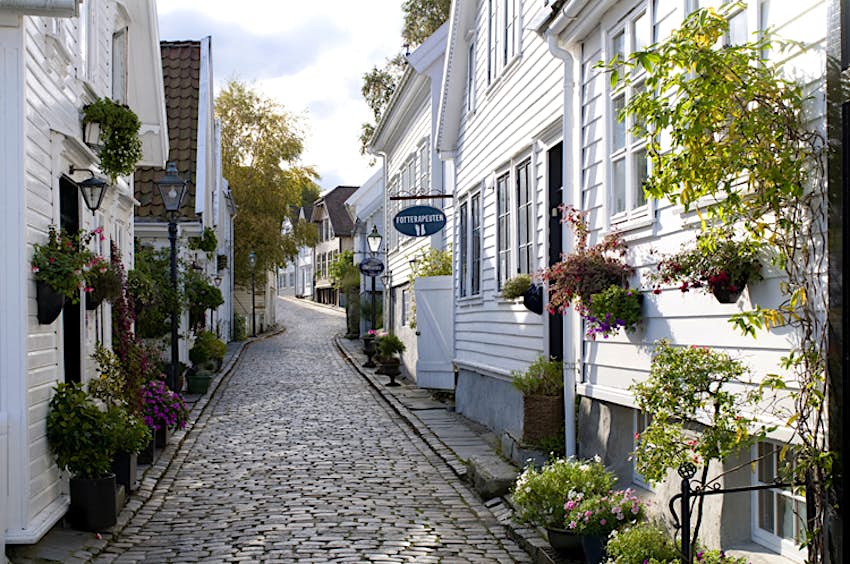 Stavanger is a city big in atmosphere with a small-town feel. Home to almost two dozen museums and, according to some, the highest concentration of wooden architecture in Europe, Stavanger’s appeal is really about atmosphere. Its scenic waterfront comes alive at night, especially in summer, and the city is a hotbed for street art: they host an annual festival, allowing artists from around the world to work on public buildings. It also serves as the gateway to Lysefjord, the southernmost of Norway’s signature fjords and home to one of its most recognizable vantage points, dramatic Preikestolen (Pulpit Rock). Norwegian Air has also just started low-cost, but controversial (nytimes.com),  flights to Norway from US cities.

Eager to explore this dramatic country? Lonely Planet Traveller magazine divulges how to have the perfect trip to Norway. 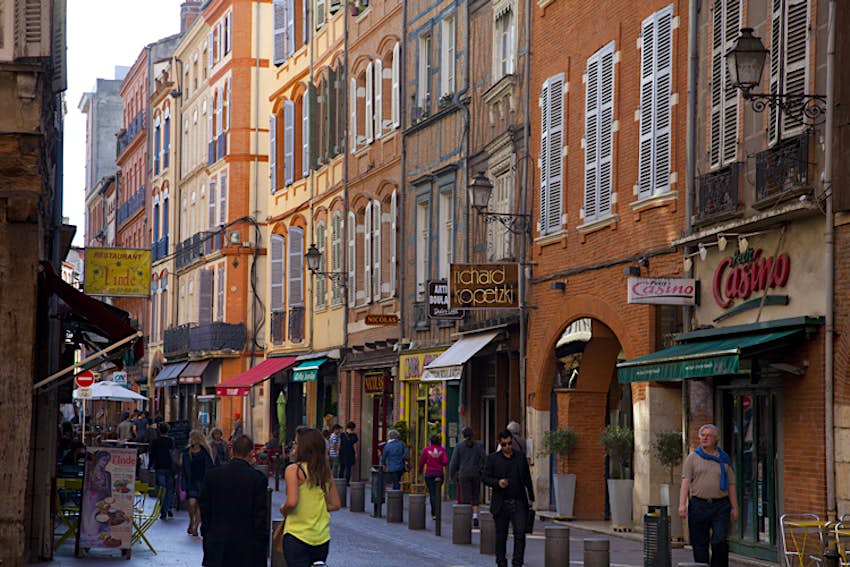 No surprise that France made the list. Yet Toulouse stood out to us, as it’s one of France’s most beautiful, historic, welcoming and underrated cities. Toulouse’s pink stone architecture, fabulous museums, historic churches and excellent value for money are drawing savvy travelers looking for alternatives to tourist-choked Paris and Nice. And of course, being France, Toulouse's culinary scene is exquisite: it's the ultimate place to experience magnificently rustic southern French cuisine, including the cassoulet of your dreams.

Find out what to do in Toulouse, from art and food to rockets and rugby.

Download our free Secret Europe ebook to get our picks for the best untouristed villages, hidden beaches, clandestine nightlife and mouthwatering cuisine in Europe. 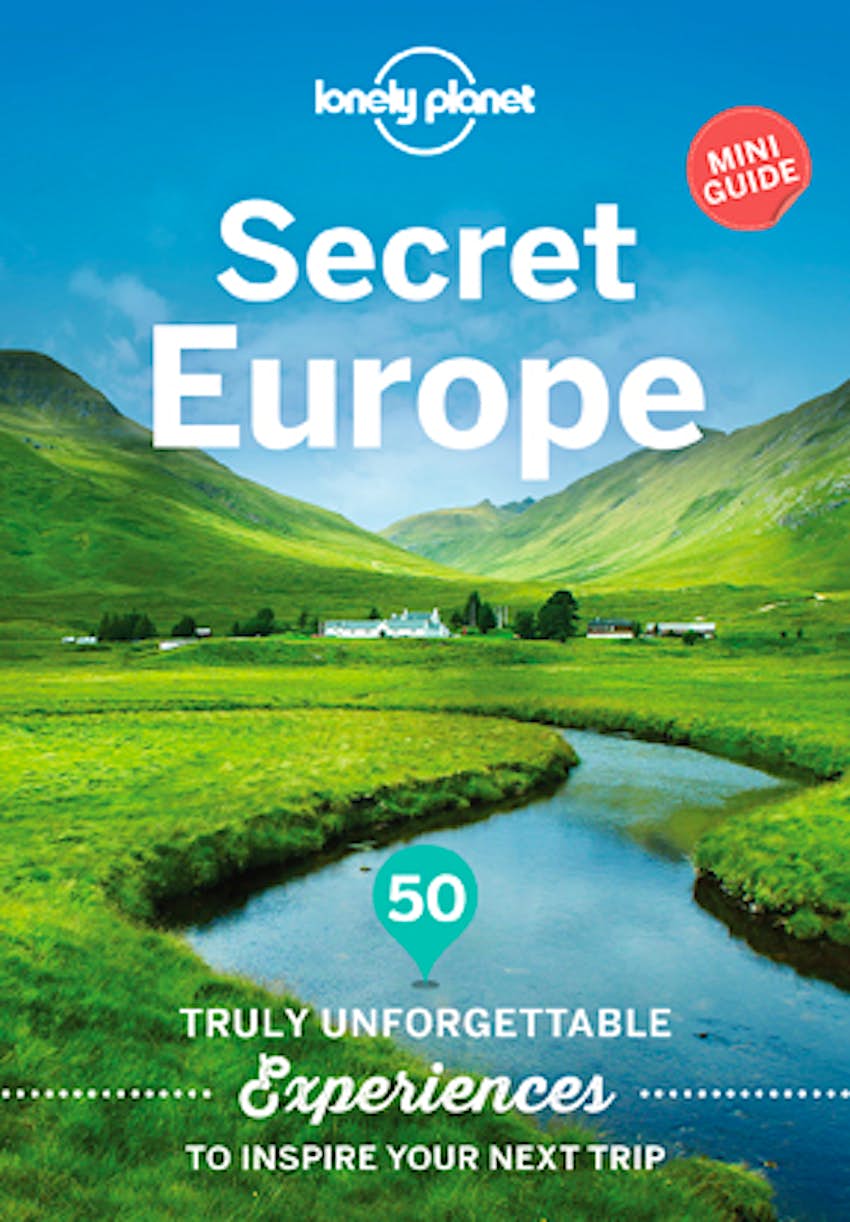 American beauties: the best towns in the Smoky Mountains